Defending Human Rights in Palestine: A Conversation with Raji Sourani and Shawan Jabarin 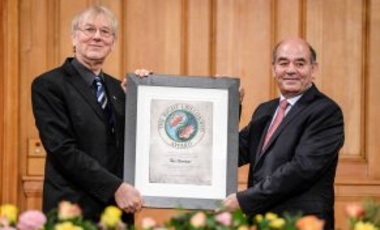 AP Images/Janerik Henriksson
Raji Sourani from Palestine, right, receives the Right Livelihood Award from the founder of the award, Jakob von Uexkull, during a ceremony at the Swedish Parliament in Stockholm, Sweden, Monday Dec. 2, 2013.

In this rare visit to the United States, leading Palestinian human rights defenders Raji Sourani and Shawan Jabarin will provide timely perspectives from the ground in Gaza-under-closure and in the aftermath of the July/August 2014 offensive, and the dynamic situation in the West Bank, including East Jerusalem. They will also discuss ongoing efforts to protect basic human rights and struggles for accountability for widespread violations, including before the International Criminal Court.

Lunch will be served.

Raji Sourani is the founder and director of the Gaza-based Palestinian Center for Human Rights. Raji also works with a number of human rights organizations and movements, including the International Association of Democratic Lawyers and the International Commission of Jurists, and was the recipient of the 2013 Right Livelihood (also known as the “Alternative Nobel Prize”) award. He was a 1991 Robert F. Kennedy Human Rights Laureate.