In Defense of a Bold U.S. Approach toward North Korea

Join us as former ROK Foreign Minister Young-kwan Yoon provides an overview of the key findings and policy recommendations from his research as the Korea Project’s inaugural Senior Visiting Scholar.

The Belfer Center’s Korea Project acknowledges the generous support of the Korea Foundation. 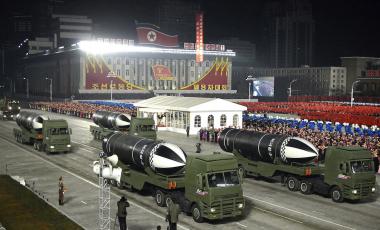 While U.S. administrations over the past three decades have tried various forms of North Korea policy, denuclearization remains elusive. As time passes, the situation continues to deteriorate. Thirty years ago, North Korea was at an embryonic stage in terms of nuclear development. Many analysts argue that North Korea has now become a de facto nuclear weapons state with 30-60 nuclear warheads and ICBM capabilities that could threaten the security of the United States. What factors led to the current state? Is there a way forward in addressing this urgent situation?

Prof. Young-kwan Yoon is a Senior Visiting Scholar with the Korea Project at the Harvard Kennedy School’s Belfer Center. He is Professor Emeritus in the Department of Political Science and International Relations, Seoul National University. He served as Minister of Foreign Affairs and Trade of the Republic of Korea (South Korea) from 2003 to 2004. Before he joined the faculty of Seoul National University in 1990, he taught at the University of California at Davis. He served as Korea’s Eminent Representative to, and co-chair of, the East Asia Vision Group II from September 2011 to October 2012. He has published several books and some 70 articles in the fields of international political economy, Korea’s foreign policy, and inter-Korean relations, some of which appeared in World Politics, International Political Science Review, Asian Survey, and Project Syndicate. Prof. Yoon received his doctoral degree from the School of Advanced International Studies at Johns Hopkins University. After completing his Senior Visiting Scholar appointment at the Belfer Center, Prof. Yoon will be serving as the 2021 Kim Koo Visiting Professor at Harvard’s Korea Institute.