The Economic and Social Impact of Arab Political Transitions 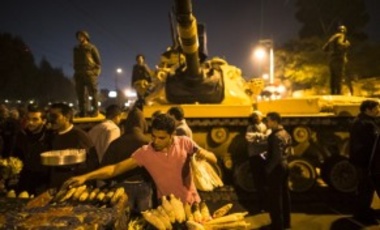 Getty Images
A street vendor grills corn as Egyptian soldiers stand guard and as protestors opposing President Mohammed Morsi gather during a demonstration at the Presidential Palace on December 18, 2012 in Cairo, Egypt.

Mustapha K. Nabli is currently international consultant, President of North Africa Bureau of Economic Studies International, based in Tunis. Hewas Governor of the Central Bank of Tunisia from January 2011, just after the revolution, until July 2012. Prior to that he was at the World Bank as Senior Advisor at the Global Prospects Group (1997-1999), then Chief Economist and Director of the Social and Economic Development Department for the Middle East and North Africa Vice-Presidency (1999-2008), then Senior Advisor to the World Bank Chief Economist (2008-2010). Prior to joining the World Bank, he was during the period 1995-1997 an independent consultant and researcher. From 1990 to 1995 he was Minister of Planning and Regional Development, then Minister of Economic Development in the Government of Tunisia. He also held the position of Chairman of the Tunis Stock Exchange (1988-1990). From 1975 to 1988 Dr. Nabli was Professor of Economics at the University of Tunis, and visiting professor at various international universities. Dr. Nabli holds a Master’s and a Ph.D. degrees in Economics from the University of California at Los Angeles.