Egypt: A Look to the Future

A conversation with His Excellency Mohamed M. Tawfik, Ambassador of the Arab Republic of Egypt to the United States. 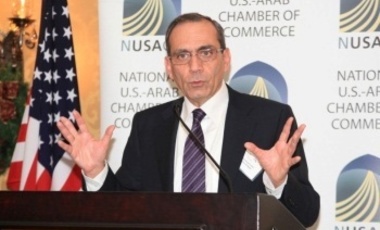 Please join us for a conversation with His Excellency Mohamed M. Tawfik, Ambassador of the Arab Republic of Egypt to the United States.  This event will be moderated by Professor Nicholas Burns, Professor of the Practice of Diplomacy and International Politics at the Harvard Kennedy School.

Mohamed M. Tawfik became ambassador of Egypt to the United States on Sept. 19, 2012, having previously served as ambassador to Lebanon since 2011.

Ambassador Tawfik also served as director-general of the Egyptian Building Fund Authority at the Ministry of Foreign Affairs (2008-2011); ambassador to Australia and nonresident ambassador to New Zealand, Western Samoa, Fiji, Papua New Guinea and the Marshall Islands (2004-2008); director of the Cabinet of the Minister of State for Foreign Affairs in Cairo (2002-2004); and counselor, minister plenipotentiary and deputy permanent representative at the Egyptian Permanent Mission to the United Nations and other international organizations in Geneva (1997-2002). In addition, he served in Washington, D.C., on a prior occasion, as third and second secretary at the Egyptian Embassy (1986-1990), as well as first secretary at the Egyptian Embassy in Harare (1991-1995).

Ambassador Tawfik has served various other postings in the Ministry of Foreign Affairs, which he joined in 1983, including first secretary at the African Department (1995-1997), second secretary in the Cabinet of the Foreign Affairs Minister (1990-1991), and attaché in the International Organizations Department (1984-1985). He holds a bachelor's of science degree in civil engineering from Cairo University; a diploma in international diplomacy from the Egyptian Institute of Diplomatic Studies; a diploma in international relations from the Institut International D'Administration Publique in Paris, and a master's degree in international organizations' law from the Universite de Paris XI.