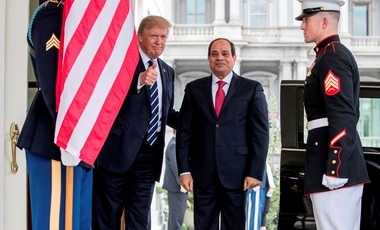 AP Photo/Andrew Harnik
U.S. President Donald Trump gives a thumbs up to members of the media as he greets Egyptian President Abdel Fattah Al-Sisi at the White House in Washington, Monday, April 3, 2017.

Many analysts of Egypt have noted that the regime of Abd al-Fatah al-Sisi differs in several ways from Hosni Mubarak’s regime. However, scholars have not yet developed a clear conceptualization of the significance of these differences. This presentation utilizes the literature on comparative authoritarianism to argue that the transition from the Mubarak regime to the al-Sisi regime is an attempt to shift from a “provision pact,” grounded in a robust and extensive patronage network, to a “protection pact,” in which elites back the regime because it provides protection against internal and external threats. It finds that this transition is incomplete and that the protection pact has begun to disintegrate, leaving Egypt with a fragmented elite and a fractured state that renders the country more difficult to rule. The presentation then considers the impact of these developments on Egypt’s political future.

Bruce Rutherford received the Ph.D. in political science from Yale University.  He is currently associate professor of political science at Colgate University, and has taught at Yale and Princeton.  He has held visiting research fellowships at Harvard Law School and Princeton.  He is the author of Egypt after Mubarak: Liberalism, Islam, and Democracy in the Arab World (Princeton, 2008) as well as several articles and book chapters on Egyptian politics.