Energy Policy Seminar: Peter Green on "Transitioning to a Low Carbon and Resilient Energy System of the Future: Key Challenges and Opportunities"

September 21's Energy Policy Seminar will feature Peter F. Green, Deputy Laboratory Director of Science and Technology at the National Renewable Energy Laboratory (NREL). Dr. Green will speak on "Transitioning to a Low Carbon and Resilient Energy System of the Future: Key Challenges and Opportunities." The seminar will be hosted by HKS Professor Joe Aldy.

Attendance: This event is open to the public and hosted on Zoom. For those who cannot attend live, the seminar will be recorded and available to watch via the EPSS homepage.

Registration: Please register at the RSVP link below. Registration will remain open until the event begins. 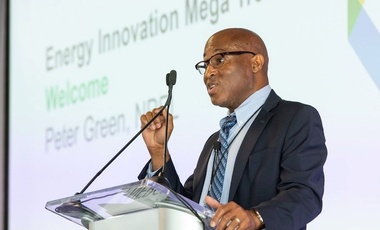 In his role as deputy laboratory director for Science and Technology, Green is responsible for NREL’s science and research goals, strengthening the laboratory’s core capabilities, and enhancing NREL’s research portfolio. In addition, he oversees the Laboratory Directed Research and Development Program, NREL-university interactions, and the postdoctoral research program.

Prior to his appointment at NREL, Green spent 20 years in academia and 11 years at Sandia National Laboratories, where his professional career began in 1985. He moved from Sandia to The University of Texas in 1996, where he became the B.F. Goodrich Endowed Professor of Materials Engineering and a professor of chemical engineering. In 2005, he was recruited to the University of Michigan to become chair of the Department of Materials Science and Engineering. He was also the Vincent T. and Gloria M. Gorguze Endowed Professor of Engineering as well as professor of chemical engineering, applied physics, and macromolecular science and technology. He served as director of a DOE Energy Frontiers Research Center: Center for Solar and Thermal Energy Conversion.

Green’s prior leadership experience includes serving as president of the Materials Research Society (MRS). He has been a member of advisory boards for the national academies, national laboratories, and universities.

His awards include election to the position of fellow of a number of societies: MRS, American Physical Society, American Ceramics Society, Royal Society of Chemistry, and the American Association for the Advancement of Science. Other recognition includes inaugural editor in chief, MRS Communications; National Science Foundation Creativity Extension Award; divisional associate editor, Physical Review Letters; and “Outstanding Referee” for the Journals of the American Physical Society.

He holds bachelor's and master's degrees in physics from Hunter College and a master's and doctorate in materials science and engineering from Cornell University.