The French and German Responses to COVID-19

Daniela Schwarzer, Director, German Council on Foreign Relations (DGAP), and Thierry de Montbrial, Founder and Executive Chairman, French Institute of International Relations (Ifri), will present and analyze the French and German responses to the COVID-19 crisis, with an eye on the Franco-German relationship and the European Union. Karl Kaiser, Fellow with the Project on Europe and the Transatlantic Relationship will chair this discussion.

This seminar is part of a series of events which explores COVID-19 from a transatlantic perspective. It is co-sponsored by the Minda de Gunzburg Center for European Studies at Harvard. 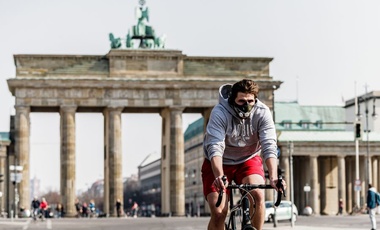 Binh Truong/Xinhua
A bicyclist is seen near the Brandenburger Gate in Berlin, capital of Germany, March 28, 2020.
ABOUT

Dr. Daniela Schwarzer is director of DGAP. Previously, she was a member of the executive team of the German Marshall Fund of the United States (GMF), serving as its senior director of research, as well as heading its Berlin office and Europe program. Prior to her work at GMF, Schwarzer spent eight years at the German Institute for International and Security Affairs (SWP), where she led its research group on European integration from 2008 to 2013. During this time, she advised Poland and France during their respective EU Council presidencies, served as a consultant to the Centre d’Analyse Stratégique for the French prime minister, and was a member of the “Europe” working group of the Whitebook Commission on Foreign and European Policy. Before joining SWP, she worked as an opinion page editor and France correspondent for Financial Times Deutschland.

Since 2014, Schwarzer has held a senior research professorship at Johns Hopkins University’s School of Advanced International Studies (SAIS) in Washington, DC/Bologna. She was a Fritz Thyssen Fellow at Harvard University’s Weatherhead Center for International Affairs in 2012–13. Schwarzer taught for several years at the Freie Universität Berlin and at the Hertie School of Governance and has lectured at the Collège d’Europe in Bruges, the Institute of European Studies of Macau, and the Universität Salzburg. She serves on the advisory boards of the European Council on Foreign Relations (ECFR) and the Jacques Delors Institute in Paris and is a non-executive board member of BNP Paribas.

Thierry de Montbrial founded the French Institute of International Relations (Institut français des relations internationales, Ifri) in 1979. He has been its President since then.

In 2008, he launched the World Policy Conference. He is a former Professor at the Ecole Polytechnique since 1974 and chaired its Department of Economics between 1974 and 1992. He is Professor Emeritus at the Conservatoire National des Arts et Métiers. He was the Chairman of the French-Austrian Center for European Economic Convergence (1985-2015).

He serves on the International Advisory Board of Lafarge and chairs the International Advisory Board of OCP Group (Morocco). He is on the Board of Directors of Renault Foundation. He was a member of the Steering Committee of the Bilderberg Meetings (1976-2012). He was a member of the Consultative Board to the WTO Director-General, Geneva (2004-2005) and a committee member for the French White Paper on Defence and Security (1993-1994; 2007-2008).

He has been a columnist for Le Monde and for Le Figaro.

He is a Visiting Professor at the China Foreign Affairs University, Beijing.

Between 1993 and 2001, he was the first Chairman of the Foundation for Strategic Research (Fondation pour la Recherche Stratégique, FRS).

In 1973, he was entrusted with the creation of the Policy Planning Staff (Centre d'Analyse et de Prévision, CAP) at the French Ministry of Foreign Affairs. He was its Director from 1973 to 1979.

He was awarded the Grand Prix of the French Geographic Society in 2003.

He is a Commandeur of the Légion d’honneur, Grand Officier of the ordre national du Mérite and has been awarded other state honors by the French and several foreign governments (Austria, Belgium, Brazil, Germany, Japan, the Netherlands, Poland, Romania, Russia, Italy…).

Thierry de Montbrial is the author of many professional articles and of twenty books (several of them translated in various languages) in economics and international affairs, including Action and Reaction in the World System - The Dynamics of Economic and Political Power. UBC Press, Vancouver, Toronto, 2013. He has also contributed to various collective works.

Thierry de Montbrial was born on March 3, 1943. He is a graduate of the Ecole Polytechnique and the Ecole des Mines, and received a Ph.D. in Economics from the University of California, Berkeley.