The Future of U.S.-Brazil Relations with Ricardo Zúniga, Principal Deputy Assistant Secretary in the Bureau of Western Hemisphere at the U.S. Department of State

Please join the Belfer Center's Future of Diplomacy Project and the David Rockefeller Center for Latin American Studies' Brazil Studies Program for a discussion on the trajectory of bilateral relations between the United States and Brazil, two of the world's biggest democracies, in the face of recent consequential midterm and presidential elections with Ricardo Zúniga, Principal Deputy Assistant Secretary and Special Envoy for the Northern Triangle in the Bureau of Western Hemisphere at the U.S. Department of State; Hussein Kalout, Research Scholar at Harvard University and former Special Secretary for Strategic Affairs of Brazil; and Nick Zimmerman, Senior Advisor at WestExec Advisors and former Director for Brazil and Southern Cone Affairs at the White House National Security Council. This panel will explore how both countries can best work together in areas such as climate change and global democratic backsliding, particularly in light of significant and ongoing challenges to the integrity of each country's democratic institutions and the rise of great power competition in the current geo-political environment. Erika Manouselis, Manager of the Future of Diplomacy Project, will serve as moderator. 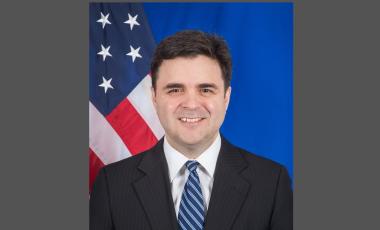 Between 2017 and 2018, he was Special Secretary for Strategic Affairs of Brazil, member of the Council of Ministers of the Chamber of Foreign Trade (CAMEX), and was President of the Brazilian National Commission on Population and Development.

Nick Zimmerman is a Senior Advisor to the Latin American Program’s Brazil Institute at the Woodrow Wilson International Center for Scholars.

Nick previously served in the Obama Administration in a variety of national security capacities as the Senior Policy Advisor to the U.S. Ambassador to the United Nations, White House National Security Council Director for Brazil and Southern Cone Affairs, and Special Assistant in the Office of the Under Secretary of Defense for Policy and Western Hemisphere Affairs Country Director.

Nick has been cited, interviewed, and published in an array of media outlets in Europe, Latin America, and the United States, including CNN Brasil, El Faro, the Financial Times, Folha de São Paulo, GloboNews, the Miami Herald, New York Magazine, and Valor Econômico.

He holds a B.A. with honors from Brown University and an M.A. from the Harvard John F. Kennedy School of Government.

Ricardo Zúniga is the Principal Deputy Assistant Secretary and Special Envoy for the Northern Triangle in the Bureau of Western Hemisphere Affairs. A career member of the Senior Foreign Service, he previously served as a Senior Diplomatic Fellow at the Woodrow Wilson Center Latin America Program, Director of the International Student Management Office at the National Defense University in Washington, DC, and as U.S. Consul General in Sao Paulo, Brazil.

Mr. Zúniga was a Special Assistant to the President and Senior Director for Western Hemisphere Affairs at the National Security Council from 2012 to 2015. He worked overseas in Mexico, Portugal, Cuba, and Spain. Domestically, Mr. Zúniga served in the State Department’s Office of Cuban Affairs, the U.S. Mission to the Organization of American States, the Bureau of Intelligence and Research, and as the Desk Officer for Uganda and Tanzania.

He was born in Tegucigalpa, Honduras and has a B.A. in Foreign Affairs and Latin American Studies from the University of Virginia.