The Future of U.S. Cultural Diplomacy

Please join us for the inaugural event of the Future of Cultural Diplomacy seminar series co-sponsored by Carla Dirlikov Canales, 2021 Fellow at Harvard University’s Advanced Leadership Initiative and the Future of Diplomacy Project at Harvard Kennedy School.

Nancy Szalwinski, Director of Cultural Programs, Bureau of Educational and Cultural Affairs, U.S. Department of State, and Ambassador Nicholas Burns, Goodman Professor of the Practice of Diplomacy and International Relations at Harvard Kennedy School will discuss ways in which cultural diplomacy can play a significant role in furthering U.S. foreign policy objectives and the Biden administration’s promise to “restore America’s global standing.”  The conversation will focus on current cultural diplomacy priorities for the United States and how changing technologies, geopolitical trends, and recent events have led to new approaches, initiatives, and challenges.  Carla Dirlikov Canales will moderate the discussion.

The Future of Cultural Diplomacy seminar series will explore how to harness culture to advance foreign policy objectives.  This series will aim to address an important but often overlooked angle in current foreign policy debates, as well as add a valuable dimension to co-curricular discussions in international affairs at Harvard. This series was conceptualized by Carla Dirlikov Canales, an Arts Envoy for the U.S. Department of State, a world-renowned opera singer, and current Fellow at Harvard University’s Advanced Leadership Initiative. 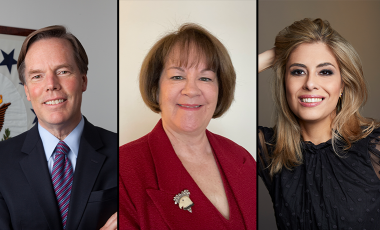 Nancy Szalwinski is currently the Director of the Cultural Division in the Bureau of Educational and Cultural Affairs and leads the U.S. State Department’s worldwide public diplomacy exchange efforts in the arts and humanities.  Nancy joined the U.S. Foreign Service in 2001, after 16 years in higher education administration.  She has previously served abroad in Belarus, Australia, Costa Rica, Cuba and Guatemala.  Nancy earned a B.A. in Spanish and French from the University of Southern Mississippi, and an M.A. in Communications Studies from St. Mary’s University in San Antonio, Texas.

Ambassador Nicholas Burns is the Goodman Professor of the Practice of Diplomacy and International Relations at Harvard Kennedy School. He is Faculty Chair of the Future of Diplomacy Project and the Project on Europe and the Transatlantic Relationship at the Kennedy School’s Belfer Center for Science and International Affairs. Burns is Executive Director of the Aspen Strategy Group and the Aspen Security Forum; he is Senior Counselor at The Cohen Group. He is Chairman of the Board of Our Generation Speaks, which seeks to bring together young Palestinians and Israelis in common purpose.

Burns served in the United States government for 27 years as a career Foreign Service Officer. He was Under Secretary of State for Political Affairs (2005-2008), U.S. Ambassador to NATO (2001-2005), U.S. Ambassador to Greece (1997-2001), and State Department Spokesperson (1995-1997). He worked at the National Security Council as Senior Director for Russia, Ukraine and Eurasia Affairs; Special Assistant to President Clinton; and Director for Soviet Affairs for President George H.W. Bush. Burns served in the American Consulate General in Jerusalem where he coordinated U.S. economic assistance to the Palestinian people in the West Bank and before that, at the American embassies in Egypt and Mauritania. He earned a bachelor’s degree in history from Boston College and a master’s degree in international relations from the Johns Hopkins School of Advanced International Studies.

Carla Dirlikov Canales brings to ALI global experience bridging cultures through performing arts. She is an internationally renowned mezzo-soprano opera singer, best known for her portrayals of Bizet’s “Carmen,” which she has performed nearly 100 times in more than 12 countries. A social advocate and cultural entrepreneur, Carla is the founder of The Canales Project, an arts advocacy organization that uses performance and music to address issues and promote conversation about cultural exchange and identity worldwide. She served as co-creator, CEO, and artistic director of programming for the Culture Summit, a forum held in Abu Dhabi to convene arts and policy leaders from around the world on issues of cultural diplomacy and is also a long-time arts envoy for the U.S. Department of State.