A Green and Political Europe

Please join the Project on Europe for a post-COP 26 discussion about how European integration of a climate change agenda is now at the very center of its political project. Europe is exiting almost two decades of existential crisis during which it lost its narrative: it no longer had a compelling story to tell. It has now found it once again. Today, a green Europe represents a normative vision, an economic growth strategy, as well as a route to a political Union: it promises to be the new narrative to revive the European project. Precisely because it is so existential for the future of Europe, getting both the story and the practice right is crucial. This is a tall order.

The breadth and depth of change that comes with this transition is unlike anything we have seen before. Preparing and acting both on the energy transition and on its socio-economic and political consequences is essential. The 2021 energy price spike is only a first warning. Unless this is done, the EU’s vision will either fail to translate into action, or inadvertently unleash social, economic and political backlashes that could come biting back at the Union.

Europe, as a climate leader in the transition, is being watched closely by others. Its success or failure in handling the transition and thus also its social, economic and political consequences will affect other transition paths, beginning with the United States.

Women in Defense, Diplomacy, and Development is co-sponsoring this event. 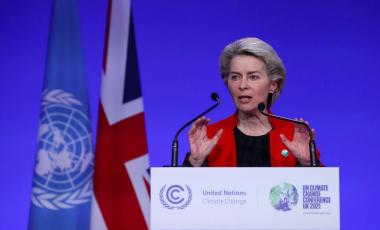 Vivien Schmidt is Jean Monnet Professor of European Integration and Professor of International Relations and Political Science in the Pardee School at Boston University. At CES, Schmidt is Co-Chair of the European Union seminar. She is also Honorary Professor at LUISS Guido Carli University in Rome.  Recent books include Europe’s Crisis of Legitimacy:  Governing by Rules and Ruling by Numbers in the Eurozone (OUP 2019), Resilient Liberalism in Europe’s Political Economy (with M. Thatcher, 2013), and Democracy in Europe (OUP 2006), named by the European Parliament as one of the ‘100 Books on Europe to Remember.’  Recent awards include decoration as Chevalier in the French Legion of Honor, the European Union Studies Association’s Lifetime Achievement Award, and a Guggenheim Foundation Fellowship for her current project on the “Rhetoric of Discontent: A transatlantic comparison of the rise of populism.”

Nathalie Tocci is the Pierre Keller Visiting Professor at the Harvard Kennedy School for Autumn 2021. She is also Director of the Istituto Affari Internazionali and an Honorary Professor at the University of Tübingen. She is Special Advisor to EU High Representative and Vice President of the Commission Josep Borrell. As Special Advisor to HRVP Federica Mogherini she wrote the European Global Strategy and worked on its implementation. She has been a member of Eni's Board of Directors since May 2020. Previously she held research positions at the Centre for European Policy Studies, Brussels, the Transatlantic Academy, Washington and the Robert Schuman Centre for Advanced Studies, Florence.

Alexandros Yannis is currently Deputy Head of Policy Planning and Strategic Foresight in the European External Action Service (EEAS) of the European Union in Brussels. He worked with Javier Solana, the first EU High Representative for common foreign and security policy, and as Member of the Cabinet of Catherine Ashton, the former EU High Representative and Vice-President of the Commission. He also worked as the EEAS Senior Expert on Energy Diplomacy and with the EU in Somalia and the UN in Kosovo. He has been Associate Professor at The Fletcher School of Tufts University in Boston, Visiting Scholar at the School of International and Public Affairs of Columbia University in New York, and he holds a PhD in international relations from the Graduate Institute of the University of Geneva.

Erika Manouselis is the Research and Administrative Manager for the Belfer Center’s flagship research projects on diplomacy and international affairs chaired by Ambassador Nicholas Burns: the Future of Diplomacy Project and the Project on Europe and the Transatlantic Relationship.  Previously, she worked as an advisor and speechwriter at the Permanent Mission of Brazil to the United Nations from 2016-2017 where she helped Brazil with negotiations for the UN’s budgetary and administrative committee. She is interested in the intersection of history and foreign policy, and authored a Belfer Center report on “The Modern Roots of the Graveyard for Diplomats: The Tripartite Conference on Cyprus in 1955.”