Humanitarian Negotiation Series: Protection of Medical Personnel and Operations at the Frontlines 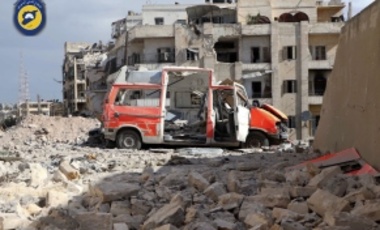 Claude Bruderlein, is Adjunct Lecturer on Global Health and Senior Researcher at the Program on Humanitarian Policy and Conflict Research. He also holds a faculty appointment at the Harvard Kennedy School of Government, where he teaches strategic planning in humanitarian protection. In his research, Mr. Bruderlein focuses particularly on humanitarian negotiation,  the development of humanitarian law, the promotion of human security strategies, as well as the role of information technologies in emergency response.

He is currently serving as Strategic Advisor to the President of the International Committee of the Red Cross (ICRC) in Geneva, focusing on strategic relationships, communities of practice and institutional development. In 2010, he co-founded the International Association of Professionals in Humanitarian Assistance and Protection and serves as its first President of the Board until 2012. Mr. Bruderlein is also Head of the ICRC Humanitarian Negotiation Exchange Platform (HNx), an initiative introduced by the ICRC to enhance informal exchanges and peer learning among professionals engaged in negotiations and mediations in situations of armed conflict and other situations of violence.

Before joining Harvard University, Mr. Bruderlein served as Special Adviser to the UN Secretary General on Humanitarian Affairs, focusing particularly on issues related to the negotiation of humanitarian access and the targeting of sanctions. He worked on negotiation of access in Afghanistan and North Korea. He also served as an independent expert to the UN Security Council on the humanitarian impact of sanctions in Sudan, Burundi, and Sierra Leone. He has previously worked with the International Committee of the Red Cross (ICRC) as a field delegate in Iran, Israel and the Occupied Territories, Saudi Arabia, Kuwait, and Yemen.

Michael VanRooyen, MD, MPH is the Director of the Harvard Humanitarian Initiative (HHI) at Harvard University.  He is also the Chairman of Emergency Medicine at Brigham and Women’s Hospital.

Dr. VanRooyen has worked as an emergency physician with numerous relief organizations in over thirty countries affected by war and disaster, including Somalia, Bosnia, Rwanda, Iraq, North Korea, Darfur-Sudan, Chad and the Democratic Republic of Congo.  He has worked in the field as a relief expert with several non-governmental organizations, including CARE, Save the Children, Oxfam, Physicians for Human Rights and Samaritans Purse International Relief.  He has been a policy advisor to several organizations, including the World Health Organization and UN OCHA.  He is a member of the Inter-Agency Standing Committee Health Cluster.  He serves on the Board of Directors for the International Rescue Committee. He has testified before Congress and at numerous UN briefings on policy issues related to Iraq, Darfur and the Democratic Republic of the Congo and served on a National Academies/GAO review of mortality in Darfur.

Domestically, Dr. VanRooyen worked with the American Red Cross to provide relief assistance at the site of the World Trade Center in New York on September 11th, 2001. He also helped to coordinate the American Red Cross public health response to Hurricane Katrina, and oversaw the development of a 400 bed surgical field hospital in Haiti after the 2010 earthquake.  He worked as a physician with the US Secret Service, NASA and with the US Public Health Service with the Navajo and Apache tribes in Arizona and New Mexico, respectively.

Dr. VanRooyen is a Professor at Harvard Medical School and the Harvard School of Public Health, where he teaches courses on humanitarian operations in war and disaster. In 2012, he founded the Humanitarian Academy at Harvard, an educational program to advance humanitarian professionalism.  He has authored the textbook “Emergent Field Medicine” and written over than 70 publications related to international emergency medicine development and humanitarian assistance. He has served on numerous academic advisory panels and boards and is on the Editorial Advisory Board of the New England Journal of Medicine.

Mr. François Stamm oversees International Committee of the Red Cross (ICRC) visits to the detention facility Guantanamo Bay, Cuba and is responsible for working relationships with the governments of the United States and Canada. He also interfaces with the National Red Cross Societies and serves as the ICRC's representative to the public at large in both countries.

Previously, Mr. Stamm was Head of Regional Delegation for India, Bhutan and the Maldives since 2008.  He oversaw visits to prisoners detained in the State of Jammu & Kashmir in India as well as in Bhutan and the Maldives. He was also responsible for carrying out a range of humanitarian activities in other violence-prone areas of India and for working relationships with the governments of India, Bhutan and the Maldives. Between 2002 and 2008 Mr. Stamm held the position of Head of Operations for North America, Western, Central & South Eastern Europe at ICRC Headquarters in Geneva.  While in Geneva he also held, on behalf of the ICRC, the position of Chair of the "Working Group on Missing Persons in Kosovo" from 2004 to 2008.

Mr. Stamm joined the International Committee of the Red Cross in 1987 and has initially served in South-East Asia (Cambodia, Philippines) and Africa (Zambia, Somalia, Zimbabwe, Malawi). He later focused on various operational contexts in the Balkans (Kosovo, Montenegro, Serbia, Macedonia) where he has worked for eight years between 1994 and 2002. He has held throughout his career at the ICRC various positions involving the distribution of assistance to victims of conflicts, the visits to persons deprived of freedom, contacts and negotiations with national and international representatives as well as senior operational management. Mr. Stamm has a commercial background and is a graduate of the Lausanne Higher Business School.

Dr. Adrienne Fricke is a Senior Fellow at the Harvard Humanitarian Initiative where she is developing policy initiatives to improve access to healthcare for Syrian refugees residing in Jordan, and a consultant specializing in human rights and refugee-related issues in the Middle East and Africa. Since 2007, she has worked with Physicians for Human Rights, serving most recently as Syria Advisor, designing and implementing projects for Syrian healthcare workers and human rights defenders. Adrienne previously assessed the health impacts on Sudanese refugee women living in Eastern Chad, and from 2006-07, was a Clinical Fellow at Harvard Law School’s Human Rights Program. She is the co-author of a series of studies by the Institute of International Education and the UC Davis Human Rights Initiative evaluating the impact of the Syrian conflict on access to higher education in Syria, as well as Jordan, Lebanon and Turkey. Adrienne holds a J.D. from the University of Pennsylvania, an M.A. in Near Eastern Studies from New York University, and a B.A. in African Studies from Yale University. She has lived and worked in Syria, Egypt and Lebanon and is fluent in Arabic and French.