Attendance: This event is open to the public and hosted on Zoom. For those who cannot attend live, the seminar will be recorded and available to watch on this page.

Accessibility: Persons with disabilities who wish to request accommodations or who have questions about access, please contact Karen Ejiofor (karen_ejiofor@hks.harvard.edu) in advance of the session. 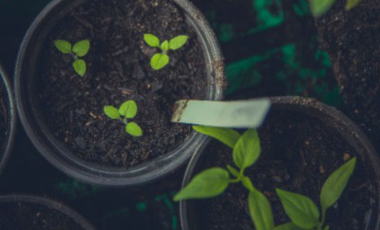 According to the UN, we have an estimated 60 years of farmable soil left on the Earth, mostly due to unsustainable agriculture. With that, regenerative agriculture, which focuses on soil regeneration and provides solutions for some of agriculture’s biggest problems – such as topsoil erosion, climate change, air and water pollution – is set to take center stage. Since building soil requires tremendous quantities of carbon, regenerative farming holds the key to moving atmospheric carbon back into the ground. It may take years for farmers to reap the large economic benefits of regenerative practices so innovative solutions in technologies and markets are needed to ease and incentivize the transition. Now <1% of the world’s farms are managed for soil health - the goal should be an aspirational 30-50% by 2030.

Dr. Ashlie Burkart, MD, CM is the Chief Scientific Officer at Germin8 Ventures and a Technology and Public Purpose Non-Resident Fellow at Harvard Kennedy School’s Belfer Center for Science and International Affairs. Dr. Burkart is boarded in anatomic and clinical pathology with expertise in gastrointestinal/liver pathology, and is a grant-funded researcher in gut health.

Drawing upon her deep pathology and research background, Dr. Burkart plays a key role in extending Germin8’s scientific capabilities and actively supporting Germin8 portfolio companies. Dr. Burkart’s extensive knowledge across health and nutrition, microbiome, agro-ecology, and climate alike positions her effectively as a medical-ecologist bringing intellectual horsepower to shepherd a new standard of care for people and the planet, enabled by our food.

Dr. Burkart received a B.A. in biology from Brown University, where she graduated magna cum laude with an honors in neuroscience, and an M.D. from McGill University’s Faculty of Medicine and Health Sciences. Dr. Burkart completed residencies in anatomic pathology and clinical pathology at John Hopkins Medical Institutions, as well as a fellowship in gastrointestinal/liver pathology at the Hospital of the University of Pennsylvania. She is a recipient of the Dean’s Award for Distinguished Teaching, the highest teaching award that is awarded by the graduating medical school class. Dr. Burkart was also awarded the National Leonard Tow Humanism in Medicine Award, which the medical college awards to “one faculty member who demonstrates both clinical excellence and outstanding compassion.”

Finian Makepeace is the Co-Founder, Policy Director & Lead Educator of Kiss the Ground. He is a renowned presenter, media creator, and thought leader in the field of regenerative agriculture and soil health. His dedication to Kiss the Ground’s mission of “awakening people to the possibilities of regeneration”, has motivated him to develop training programs, workshops, and talks designed to empower people around the world to become confident advocates for this growing movement. Finian is also a producer of Kiss the Ground the movie.

Renée Vassilos is an Agricultural Economist with twenty years of large-scale production agriculture industry, investor relations, and investment experience. She is a recognized critical thinker on how innovation will transform agribusiness and the farm towards a regenerative model. Her thinking has been informed by her time with USDA, decade with John Deere, and running her agribusiness consultancy- Banyan Innovation Group.

Renée has lived and worked in Amsterdam and Beijing contributing to her robust global experience, cultural competence, and network. She has a BS and MS in Agricultural Economics from the University of Illinois, Champaign-Urbana and University of California, Davis, respectively.

Today, Vassilos shares her expertise through her role as the Director of Agriculture Innovation with The Nature Conservancy (TNC) and Board Director positions. For TNC, she manages investments in solutions that will scale soil health building practices. She serves as a Board Director for Seedlinked, the future of seed- leveraging crowdsourcing to revolutionize variety testing and informed sales. She also serves as Board Director for GrainPro, Ultra-Hermetic™ dry good and seed storage solution.

Philip Mulvey is part consultant, part contractor, part researcher and part entrepreneur, and has always been a free thinker. Phil has degrees in agriculture (soil science) and hydrogeology, but practices as in the fields of remediation, rehabilitation and land restoration, fundamentally a land nurturer. He has over 40 years’ experience in the mining, urban, agricultural and greening the desert sectors.  He currently has businesses in carbon offset management software,  environmental soil science, whole-of-farm management, bioremediation, civil earthworks and property development operating in UK, Middle East and Australia.

Through these avenues he has trained numerous scientists in the art of commercial scientific problem-solving. Phil's critically acclaimed book Ground Breaking:  Climate Change and Soil Security is a culmination of his lifelong pursuit to provide practical solutions for agricultural management, enabling the restoration of landscape, climate and community. Phil focuses on practical real world solutions to some of the largest problems facing humanity today, including land use management, soil carbon sequestration, bare ground reduction and bush corridor restoration.

Gonzalo Fuenzalida, is the Chief Executive Officer and and Co-Founder at Andes. Andes empowers biology to enable positive action against climate change, by developing microbial technology to reduce GHG emission and remove carbon dioxide from the atmosphere. Gonzalo has studies in business administration and economics from Pontificia Universidad Católica de Chile. For past 10 years, Gonzalo has been a serial entrepreneur of biotechnology start ups developing products focused on positively impacting human health, agriculture, soil health, and climate.

Aria McLauchlan is the Co-founder & Executive Director of Land Core, a non-profit organization advancing soil health policies and programs that create value for farmers, businesses and communities. In her role at Land Core, she has shepherded the organization’s rise to the center of the national soil health conversation. She guided the successful passage of language in both the House and Senate in 2019, supporting soil health at the USDA, and built a broad coalition of farmers, businesses, and NGOs to help secure over $50M in federal investment in soil health in the 2018 Farm Bill.

In 2021, Aria was recognized with the Emerging Leaders in Food & Agriculture award for her work on U.S. food and agriculture systems and soil health policy. She was a 2018 Exchange Fellow at the Stone Barns Center for Food and Agriculture - selected as a leader at the intersection of food, agriculture and climate change equipped to tackle vexing challenges and identify emerging opportunities for systemic change across geographies and disciplines.

Previously, Aria served as communications director of a California-based non-profit organization promoting healthy soil. In this role, she directed the launch of “The Soil Story,” a petition campaign that resulted in the passing of the California Healthy Soils Initiative. Aria previously spent a decade working in business development, marketing and communications, primarily on social impact campaigns for global brands and non-profits.

Paul Gambill is the CEO and one of the co-founders of Nori. In 2015, Paul founded the first known community dedicated to carbon removal called Carbon Removal Seattle. Prior to founding Nori, he was a product manager working at various agencies including Deloitte Digital, where he led teams building mobile apps for Fortune 500 clients including Nike, Showtime, Target, and Starbucks. He earned his Bachelor of Science in Engineering degree from Arizona State University, and his Master of Engineering Management degree from Duke University. Follow Paul on Twitter at twitter.com/paulgambill.

Louise Edmonds is the Founder & CEO of Carbon Sync, a soil carbon farming project developer based in Western Australia. Louise believes the root cause of the ecological crisis in Agriculture is social and cultural. She has developed a project to restore the ecological health of the Wheatbelt of Western Australia. The project educates farmers on the principles of Holistic and Regenerate Management and supports them to apply the management principles in their own unique context. Australia is the only country in the world that has a nationally legislated carbon market and a Paris compliant measured soil carbon sequestration methodology. This unique context enables Carbon Sync to plan and execute agro-ecosystem restoration projects at scale and over decadal time frames.

Mitchell Hora is a 7th generation Iowa farmer and the Founder/CEO of Continuum Ag, a soil health data intelligence company. Continuum Ag launched TopSoil as the first soil health data platform in early 2020 and has grown its footprint to over 38 states and 15 countries as it pursues its mission to help 1 million farmers profit from improving their soil health. The company helps farmers systematically implement regenerative ag, while avoiding risk and positioning farmers to tell their story and create environmental outcomes, like carbon credits. Continuum expands its scope via its global consultant network and collaborations with organizations, such as Rabobank, Land O'Lakes, CIBO, and others. For his efforts, Mitchell has been named to the Forbes Under 30 and the AgGrad 30 Under 30 list.

Allison Nepvieux is the Director of Sustainability at Bushel, an independently owned and operated software company headquartered in Fargo, N.D. Allison is leading Bushel's strategy around how to enable sustainability and traceability using Bushel's innovative software products and solutions. Prior to joining Bushel, Allison led the U.S. grain industry's work on sustainability, biotechnology and crop protection in overseas markets. She also previously worked in the fresh produce industry and is the 4th generation of cow-calf producers in Texas.

Technological change has brought immeasurable benefits to billions through improved health, productivity, and convenience. Yet as recent events have shown, unless we actively manage their risks to society, new technologies may also bring unforeseen destructive consequences.

Making technological change positive for all is the critical challenge of our time. We ourselves - not only the logic of discovery and market forces - must manage it. To create a future where technology serves humanity as a whole and where public purpose drives innovation, we need a new approach.

The Environment and Natural Resources Program's mandate is to conduct policy-relevant research at the regional, national, international, and global level, and through its outreach initiatives to make its products available to decision-makers, scholars, and interested citizens.

Over the past 30 years environmental policy has changed dramatically. Today it is an integral part of energy policy, economic development, and security. Security means not only protection from military aggression, but also maintenance of adequate supplies of food and water, and the protection of public health. These problems cannot be addressed from one discipline or from the perspective of one issue or one country. The world of the future will demand the integration of multiple needs and values across both disciplinary and geographic boundaries.