Inside the Arab Awakening 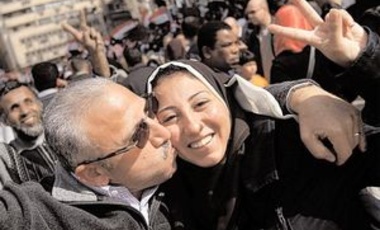 Sultan Sooud Al Qassemi is a UAE based columnist whose columns have appeared in publications within and outside the Arab Gulf region.

His columns have appeared in The Gulf News, The National Newspaper, The Financial Times, The Independent, The Guardian, The Huffington Post, Foreign Policy, Open Democracy, The Hindu, The Globe and Mail, Gulf Business and Arab News amongst others.

Sultan Al Qassemi is also a non-resident Fellow at the Dubai School of Government.

Rami George Khouri is a Palestinian-Jordanian and U.S. citizen whose family resides in Beirut, Amman, and Nazareth. He is director of the Issam Fares Institute for Public Policy and International Affairs at the American University of Beirut. His journalistic work includes writing books and an internationally syndicated column, and he also serves as editor at large of the Beirut-based Daily Star newspaper.

He spent the 2001–2002 academic year as a Nieman Journalism Fellow at Harvard University and was appointed a member of the Brookings Institution Task Force on US Relations with the Islamic World. He is a research associate at the Program on the Analysis and Resolution of Conflict at the Maxwell School,  Syracuse University (NY, USA), a Fellow of the Palestinian Academic Society for the Study of International Affairs (Jerusalem), and a member of the Leadership Council of the Harvard University Divinity School. He also serves on the board of  the Center for Contemporary Arab Studies at Georgetown University.

He was executive editor of the Daily Star newspaper in 2003–2005, and before that had been editor-in-chief of the Jordan Times for seven years, when he also wrote for many years from Amman, Jordan for leading international publications, including the Financial Times, the Boston Globe, and the Washington Post. For 18 years he was general manager of Al Kutba, Publishers, in Amman, and in recent years served as a consultant to the Jordanian tourism ministry on biblical archaeological sites. He has hosted programs on archaeology, history, and current public affairs on Jordan Television and Radio Jordan. He often comments on Mideast issues in the international media and lectures frequently at conferences and universities throughout the world.

Dr. Karim Makdisi is an Associate Professor of International Politics and International Environmental Policy in the Department of Political Studies and Public Administration at the American University of Beirut (AUB). He received his Ph.D. in International Relations from The Fletcher School of Law and Diplomacy at Tufts University (Boston). Dr.

Makdisi is also the Associate Director of AUB's Issam Fares Institute for Public Policy and International Affairs (and serves as the Faculty Director for the United Nations in the Middle East Research Project there); as well as the Coordinator of the Environmental Policy component of AUB's Interfaculty Graduate Environmental Science Program.  Dr. Makdisi was elected by his peers onto as a founding member of the Board of Trustees of the recently established Arab Council for the Social Sciences (ACSS). Prior to joining AUB, Dr.

Makdisi worked at the United Nations Economic and Social Commission for Western Asia. His recent research interests include the role of the UN in the Middle East; the politics of environmentalism; and how the field of international relations has travelled to and been received in the Middle East.

Diana Buttu is a fellow with the Middle East Initiative at the Belfer Center and an Eleanor Roosevelt visiting fellow at the Human Rights Program at Harvard Law School.

Diana Buttu is a Palestinian-Canadian attorney and frequent commentator on Middle East politics.  She previously served as a legal advisor to the Palestinian negotiating team in its negotiations with Israel and later as an advisor to Palestinian President Mahmoud Abbas.