"Iraq, Syria and the Rise of the Islamic State" with Rania Abouzeid

A seminar with Rania Abouzeid, a Beirut-based independent journalist who has covered the Middle East for over a decade for a host of outlets, including TIME magazine and the New Yorker. 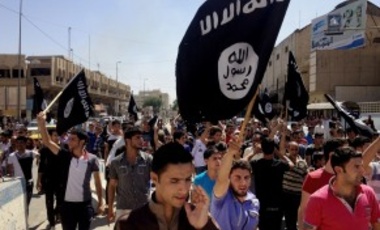 AP Images
Demonstrators chant slogans to support al-Qaida-inspired Islamic State of Iraq and the Levant as they carry al-Qaida flags in front of the provincial government headquarters in Mosul, Iraq.

A seminar with Rania Abouzeid, a Beirut-based independent journalist who has covered the Middle East for over a decade for a host of outlets, including TIME magazine and the New Yorker.

Across the Middle East, most of the movements that began as peaceful protests against authoritarian regimes have devolved into violent uprisings. In Syria and Libya they have become complex armed conflicts within a spectrum of Islamist influence. Borders have been erased, in practice if not on paper, by the rise of the transnational group the Islamic State. The instability has propelled millions of refugees from their homes into fragile neighboring states, threatening to destabilize them. It is a a time of historic and very bloody upheaval, change that has ramifications well beyond the region.

How did we get here, and where are we headed? What is happening and who are the groups influencing it?

Rania Abouzeid is a Beirut-based independent journalist who has covered the Middle East for over a decade, reporting on wars, assassinations and popular movements for a host of outlets including TIME magazine and the New Yorker. She covered the uprisings in Tunisia and Egypt before focusing on Syria, a country she continues to report from at great personal risk. One of the few journalists with access to Al-Qaeda in Syria, Abouzeid has most recently mapped out the rise of the Islamic State and explored the changing notion of identity in the Middle East as borders fray and citizens retreat into ever-smaller ideas of self.