"Islamist Politics in the Age of ISIS" with Jillian Schwedler 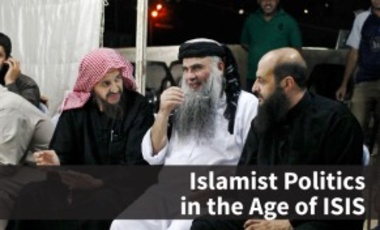 A seminar with Jillian Schwedler, Professor of Political Science, Hunter College and the Graduate Center, City University of New York. Part of the spring 2015 study group led by MEI Visiting Scholar Michael C. Hudson: "Rethinking the Arab State: The Collapse of Legitimacy in Arab Politics." To lear more about the series, click here.

For many years, scholars of Islamist groups in the Arab world have distinguished between moderate and radical trends.  Since the Arab uprisings, however, these categories may make less sense analytically as well as empirically.  Who are the main actors in the current context?  How have relations between various Islamist groups and the region's regimes changed?  How much has the rise of the Islamic State (ISIS) altered the landscape of Islamist politics in the region?

**Please note: this session will be held on Wednesday, February 25 in Nye Conference Room A - on a different day and place from other sessions in this series.

Study Group participants are encouraged to buy the following book. This seminar will focus on topics covered in Chapter 6 of the book:

Dr. Jillian Schwedler is Professor of Political Science, Hunter College and the Graduate Center at the City University of New York. Dr. Schwedler is author of the award-winning Faith in Moderation: Islamist Parties in Jordan and Yemen (Cambridge 2006) and editor (with Dr. Laleh Khalili) of Policing and Prisons in the Middle East (Columbia/Hurst 2010). Most recently, she published “Islamists in Power: Inclusion, Moderation, and the Arab Uprisings,” in the Middle East Development Journal. Her articles have appeared in World Politics, Comparative Politics, Middle East Policy, Middle East Report, Journal of Democracy, and Social Movement Studies. Dr. Schwedler was a member of the editorial committee (1995-2002) and chair of the board of directors (2002-2009) of the Middle East Research and Information Project (MERIP), publishers of Middle East Report. She received her PhD in Political Science from New York University in 2000. She has conducted research in Jordan, Yemen, and Egypt and has traveled extensively throughout the region.