Just Don't Know What To Do With Turkish-American Relations

Co-sponsored by the Özyeğin Forum on Modern Turkey, Minda de Gunzburg Center for European Studies; the Weatherhead Center for International Affairs; and the Center for Middle Eastern Studies. 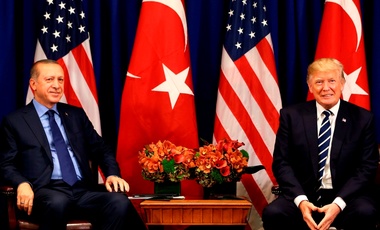 Pool Photo via AP
Turkey's President Recep Tayyip Erdogan, left, and US President Donald Trump pose for photographers at the start of their meeting in New York, Thursday, Sept. 21, 2017.

Soli Özel is a Senior Lecturer at Kadir Has University in Istanbul and a columnist at Habertürk Daily newspaper. Currently a Tom and Andi Bernstein Fellow at the Schell Center, Yale Law School, he has guest lectured at Georgetown, Harvard, Tufts and other US universities, taught at UC Santa Cruz, SAIS, University of Washington, Hebrew University and held fellowships at Oxford, the EU Institute of Strategic Studies, and was a Fisher Family Fellow of the “Future of Diplomacy Program” at the Belfer Center of the Kennedy School of Government, Harvard University. In the Spring of 2013 he was a Keyman fellow and a visiting lecturer at Northwestern University. From 2015-17 he was a Richard von Weizsacker fellow at the Robert Bosch Academy in Berlin.  Özel is working on two books: one tentatively entitled “The history of Turkey’s Future” and the other co-authored with Michael T. Rock, a comparison of Indonesia, Malaysia, Egypt and Turkey looking at their developmental and democratic successes and failures. He holds a BA in Economics from Benningon College (1981) and an MA in International Relations from Johns Hopkins University School of Advanced International Studies (SAIS-1983).

Co-sponsored by the Özyeğin Forum on Modern Turkey, Minda de Gunzburg Center for European Studies; the Weatherhead Center for International Affairs; and the Center for Middle Eastern Studies.