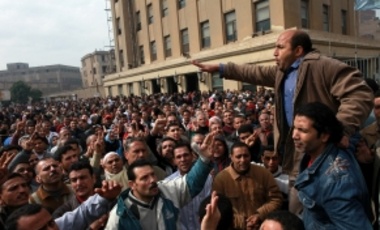 AP Images
Textile workers strike to demand a minimum wage, the removal of their company's head and the head of the firm's holding company, and back pay of yearly bonuses in Mahalla al-Kobra, Egypt.

The history of the Egyptian Republic is one varying material commitments to the class of citizens identified as laborers, from a perceived highpoint in the Nasserist era to nadir in the waning years of the Mubarak presidency, when a series of strikes and labor protests dwarfed those of explicitly political movements in size, scope and frequency. Upon closer inspection, the authoritarian state’s disposition to explicitly political labor movements has been invariably hostile, from public executions by the incipient regime in 1954 to violent crackdowns on strikes and sit-ins by the current military led government. This talk examines attempts to stitch together an organized political actor under the banner of labor, following the fall of Mubarak in 2011 and before the military coup of 2013. What effect, if any, has this stream of political action played in the building of the order that exists today?