Please note this event will be on WEDNESDAY, FEBRUARY 10 at 4pm in NYE A (postponed from Monday, February 8). 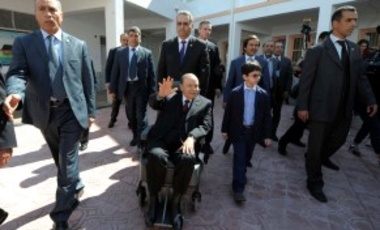 AP Images/Sidali Djarboub
President Abdelaziz Bouteflika, centre, in a wheelchair, waves as he leaves after voting in the presidential elections in Algiers, Thursday, April 17, 2014.

Please note this event will be on WEDNESDAY, FEBRUARY 10 at 4pm in NYE A (postponed from Monday, February 8).

When President Bouteflika had a stroke in April 2013, Algeria faced the forbidding prospect of a triple succession crisis, since the chief of the general staff and the director of the intelligence services were, like the president himself, in their mid- to late seventies and due if not overdue for retirement. The break-up of the intelligence services since the autumn of 2013 and the dismissal of its overlord, General Mediène, has simplified the succession problem but not resolved it. The decision to revise the Constitution at this juncture adds another dimension to what is taking place. In this lecture, Professor Roberts will examine the stakes in this unfolding drama and the implications for the future.

About Dr. Roberts:
Dr Hugh Roberts is the Edward Keller Professor of North African and Middle Eastern History at Tufts University, Medford, Massachusetts, USA and a specialist on North African history and politics. He took up his post at Tufts in January 2012.  Between 1976 and 1997 he lectured in the School of Development Studies at the University of East Anglia, the Institute of Development Studies at the University of Sussex, the Department of Political Science at the University of California, Berkeley and the Department of History at the School of Oriental and African Studies in the University of London. From 1997 to 2002 he was a Senior Research Fellow of the Development Studies Institute at the London School of Economics and Political Science. He has also worked outside academia, as an independent scholar and consultant on North African affairs and as Director of the International Crisis Group’s North Africa Project, based in Cairo, from 2002 to 2007 and again from February to July 2011. He is the author of The Battlefield: Algeria 1988-2002. Studies in a broken polity (Verso, 2003); Berber Government: the Kabyle polity in pre-colonial Algeria (I.B. Tauris, 2014) and Algérie-Kabylie:Études et interventions de Hugh Roberts (Algiers, Éditions Barzakh, 2014).