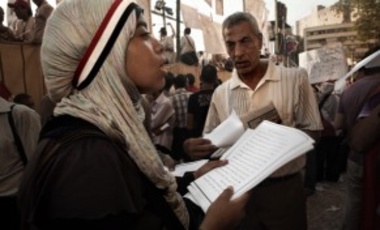 Getty Images
Activist distributing flyers of the movement during the demonstration on Tahrir Square to defend the revolution in Cairo, Egypt.

The presentation will make the case that every country in the MENA region is in need of a new social contract. The reason is that, despite huge differences in their resource endowments, levels of development and system of government, all these countries adopted very similar social contracts at independence. The state provided jobs, free education and health, and subsidized food and fuel, in return for limited voice and accountability from citizens. In different ways, this contract is proving to be unsustainable, reflected in the Arab Spring revolutions and, in some cases, their violent aftermath, and in other cases in growing tensions around youth unemployment, poor quality services and demands for greater accountability. Evidence from surveys of wellbeing shows that it was frustration around these issues, rather than inequality, that triggered the Arab Spring. The presentation will describe the contours of the new social contract for MENA, and show how it needs to be adapted to the circumstances of every country. In particular, the timing and sequencing will be different for countries that are currently in civil war, such as Syria, Iraq, Libya and Yemen; countries undergoing a (sometimes painful) transition to democracy, such as Egypt, Tunisia, Morocco and Jordan; and countries that have not experienced major uprisings, but are nevertheless reaching the limits of the old social contract. Finally, the presentation will discuss ways in which the transition to a new social contract will be in the interests of incumbent governments.

Shantayanan Devarajan is the Chief Economist of the World Bank’s Middle East and North Africa Region.
Since joining the World Bank in 1991, he has been:

He was the director of the World Development Report 2004, Making Services Work for Poor People. Before 1991, he was on the faculty of Harvard University’s John F. Kennedy School of Government. The author or co-author of over 100 publications, Mr. Devarajan’s research covers public economics, trade policy, natural resources and the environment, and general equilibrium modeling of developing countries. Born in Sri Lanka, Mr. Devarajan received his B.A. in mathematics from Princeton University and his Ph.D. in economics from the University of California, Berkeley.