In the third installment of the Future of Cultural Diplomacy Series, UNESCO’s Director-General Audrey Azoulay will offer her unique perspective on cultural diplomacy as the leader of one of the world’s largest multilateral agencies focused on education, scientific, and cultural issues. Director-General Azoulay will discuss UNESCO’s current priorities, including education, culture, gender equality, and freedom of expression, and how UNESCO has provided multilateral approaches to crises stemming from the Covid-19 pandemic. Carla Dirlikov Canales, Harvard Advanced Leadership Initiative Fellow and Arts Envoy for the U.S. Department of State, will moderate this discussion.

The Future of Cultural Diplomacy seminar series explores how to harness culture to advance foreign policy objectives.  This series aims to address an important but often overlooked angle in current foreign policy debates, as well as add a valuable dimension to co-curricular discussions in international affairs at Harvard. This series was conceptualized by Carla Dirlikov Canales, an Arts Envoy for the U.S. Department of State, a world-renowned opera singer, and current Fellow at Harvard University’s Advanced Leadership Initiative. 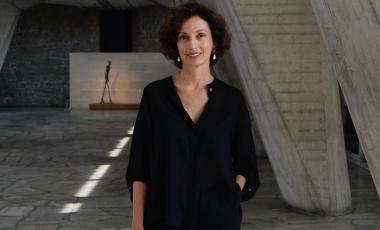 The 39th session of UNESCO’s General Conference elected Audrey Azoulay as Director-General of UNESCO. She took office on 15 November 2017 for a four-year term.

A graduate of France’s Ecole Nationale d’Administration and of the Paris Institut d’Etudes Politiques, she holds a diploma in Business Administration from the University of Lancaster (UK).

Having worked in the sector of culture since the start of her professional career, Audrey Azoulay has notably focused on the funding of French public broadcasting and on the reform and modernization of France’s film support system. She has also served the European Commission providing her expertise on issues concerning culture and communication.

In 2014, as an advisor on culture to the President of the French Republic, she notably initiated the development of a protection plan for heritage in danger, which she was able to implement in 2016 as Minister of Culture and Communication. She has also prioritized improving children’s access to culture with the launch of artistic and cultural education school programmes “Création en cours” and created innovative cultural outreach programmes for people in remote and vulnerable areas “Microfolies”.

With a longstanding commitment in favour of intercultural and intergenerational dialogue to advance education for all and the dissemination of scientific and cultural knowledge, she is determined to maintain this commitment as the head of UNESCO.

She will spare no effort in ensuring that UNESCO fulfils its universal mandate fully in promoting values of humanism and openness and serving as a driving force in the United Nations system. The Organization is to achieve this by serving as an intellectual forum for the world of tomorrow, and as a standard-setter that will help society advance, as well as serving as an expert agency contributing to the dissemination of knowledge to the greatest number of people worldwide.

According to Audrey Azoulay, “none of the major challenges facing the world today can be met by any one country on its own without relying on the fundamental pillars of science, education and culture. Thus, UNESCO can and must fully participate in a world order based on multilateralism and humanist values.”

You can read her complete CV here.