The Nature of Conflict and the Prospects for Peace in Yemen 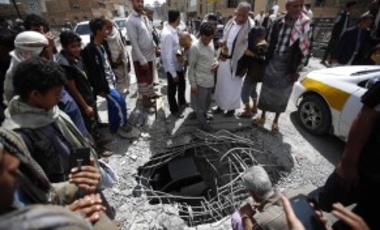 AP Photo/Hani Mohammed
People stand around damages made by a Saudi-led airstrike on a bridge in Sanaa, Yemen, Wednesday, March 23, 2016.

"Yemen after five months [of war] looks like Syria after five years," that's how the Red Cross chief painted the image of the devastating war taking place in Yemen. But what spurred this conflict in a country that was once praised by the international community as a successful model of peaceful transition in the Arab Spring much like Tunisia? Was the transition doomed to fail since the beginning given the poor economic conditions of the country, the tribal/sectarian nature of society and the heavily militarized population? Or was it a failure in the management of the transition process? What were/are the roles of the regional players and the international community in pushing/preventing the country from collapsing?

In this discussion, we will explore those questions and more with former Acting Finance Minister of Yemen, Mr. Husam Al-Sharjabi, who played a key role in the country's transition as the leader of one of the most prominent new political parties that were established after the Arab Spring. We will also explore the role of civil society organizations (CSOs) and non-governmental and international development organizations in Yemen's uprising, transition, and now war with Khlood Al-Hagar, a veteran of the NGO and CSO sector in Yemen, most recently at the Social Fund for Development in Sana'a.

We hope you join us in this intriguing conversation about another part of the Middle East that is very instrumental to the stability of the region but is not highlighted enough in the media.

Co-sponsored by the Center for Public Leadership.

Husam Al-Sharjabi is an ex-acting Minister of Finance and member of the Supreme Defense Council. He is board member of the Central Bank of Yemen and the chairman of the National Commission on Anti-Money Laundering and Counter-Terrorism Financing. He served as Vice Chairman of the Social Welfare Fund, member of the board of the Social Fund for Development and the General Corporation for Property Development and Investment (Shibam Holding), one of the largest State Owned Enterprises in Yemen. Until 2014, Mr. Al-Sharjabi was the founder and Managing Partner of Apex Consulting, the largest consulting firm in Yemen.

He is a member of the presidium of the National Authority for Monitoring the Decisions of the National Dialogue Conference, which is chaired by the President of Yemen. During the National Dialogue Conference (NDC), he served as a member of the Consensus Committee in the NDC which was in charge of resolving conflict within and between working groups in the conference. The committee comprised 24 of the most prominent politicians (including the President of Yemen), youth activists, and civil society representatives in Yemen. He is the founder and President of Al-Watan Party, which is one of three new parties with significant representation in the institutions managing the transition process in Yemen.

Mr. Al-Sharjabi has a Masters of Public Administration (MPA) from Cornell University, USA and a MSc. in Information Systems Security from the University of Glasgow, UK.

Khlood Al-Hagar is a Master's Candidate in Sustainable International Development at the Heller School for Social Policy and Management at Brandeis University, where she is a World Bank Scholar and Researcher for the Center for Global Development and Sustainability. Prior to starting her studies at Brandeis, Ms. Al-Hagar worked for over ten years in the non-profit international development sector in Yemen, focusing on needs assessment, program development, capacity building and evaluations for civil society organizations (CSOs) focused on humanitarian assistance, empowerment of women and youth, poverty reduction, and participatory development in conflict- and disaster-affected communities. Most recently, she worked as a Senior Project Officer for the Social Fund for Development in Sana'a Yemen, responsible for the NGO Department and Training and Institutional Unit. She has managed grants and projects for funders including the UNDP, French Social Fund for Development, Britain's DFID, the World Bank, CARE International, other International NGOs and the Yemeni government. Ms. Al-Hagar received her Bachelor's degree in Business Administration from Sana'a University, as well as her Higher Diploma in International Development and Gender, from Sana'a University's Gender and Development Research and Studies Center.

Asher Orkaby received his PhD from Harvard University in Middle East History, specializing in modern Yemen. He is the author of the forthcoming book Beyond the Arab Cold War: The International History of the Yemen Civil War, 1962-68 with Oxford University Press. Over the course of the conflict in Yemen, he has contributed regularly to Foreign Affairs, The National Interest, and many other policy publications and has commented on both English and Arabic media. Dr. Orkaby is currently a fellow in the Near Eastern Languages and Civilizations Department at Harvard, where he is researching Egypt’s use of chemical weapons in Yemen during the 1960s.