Navigating the Crisis in Transatlantic Relations 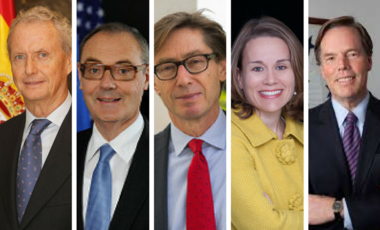 Belfer Center for Science and International Affairs, Project on Europe and the Transatlantic Relationship, Future of Diplomacy Project

Ambassador Pedro Morenés is since April 2017 the Ambassador of Spain to the United States. He obtained a Bachelor of Law from the University of Navarre and a Master's Degree in Ship Management and Economics from the Bremen Institute of Shipping Economics and started his career as a maritime lawyer: he was a member of the maritime law firm AMYA, lawyer of the Astilleros Españoles company, director of Legal Services of the Division of Naval Construction at the National Industrial Institute, secretary of the Council and of Legal Matters of Astilleros Españoles, and Astilleros de Talleres del Noroeste, and commercial director of the Naval Construction Division of the National Industrial Institute. From December 2011 to November 2016 he was minister of Defense. Previously, he was Deputy Minister of Defense, Deputy Minister of Security, and Deputy Minister of Science and Technology Policy. He has held the positions of secretary general of the Círculo de Empresarios Business Circle, president of the Board of Directors of Construcciones Navales del Norte and president of MBDA España and Segur Ibérica.

Ambassador David O’Sullivan has a long and distinguished career that spans five decades.  He has served in a number of senior official posts in the European public service.
Prior to his appointment as EU Ambassador to the U.S., he was the Chief Operating Officer of the ‘European External Action Service’ and responsible for establishing this new EU diplomatic service.  The Service is one of the largest diplomatic networks with 140 delegations across the globe.
Ambassador O’Sullivan’s career includes a number of notable and senior positions within the European Commission: Head of Commission President Prodi’s Cabinet (1999-2000), Secretary General of the European Commission (2000-2005).  He has extensive trade experience as Director General for Trade (2005-2010) and Chief Negotiator for the Doha Development Round.  He was responsible for overseeing the launch of a number of free trade agreements and concluded the EU’s agreement with South Korea. Before joining the Commission, he started his career with the Irish Department of Foreign Affairs and Trade (1977-1979).
Mr. O’Sullivan graduated from Trinity College, Dublin with a degree in Economics and Sociology (1975) and completed post-graduate studies at the College of Europe, Bruges (1976).
While at Trinity, he was Auditor and debating Gold medalist of the College Historical Society and winner of the Irish Times debating competition.
He holds an Honorary Doctorate from the Dublin Institute of Technology (2005) and was awarded a second Honorary Doctorate from his alma mater Trinity College, Dublin (2014). He has also been a visiting Professor at the European College of Parma.
–  EU Transatlantic Business Award by the American Chamber of Commerce (June 2014).
–  Alumnus of the Year by the College of Europe (2013).
–  European of the Year by the European Movement of Ireland (1999).
Mr. O’Sullivan was born in 1953 in Dublin, Ireland.  He is married to the architect Agnes O’Hare and they have two children. He speaks English, French, Spanish, German, Japanese and Irish.

Julianne (“Julie”) Smith is Senior Fellow and Director of the Transatlantic Security Program at the Center for a New American Security. She is a contributing editor to Foreign Policy, where she coedits “Shadow Government.”
From 2012-2013, she served as the Deputy National Security Advisor to the Vice President of the United States. In addition to advising the Vice President on a wide range of foreign and defense policy issues, she represented him in Cabinet and Deputies level interagency meetings. During March and April of 2013, she served as the Acting National Security Advisor to the Vice President.
Before her post at the White House, she served for three years as the Principal Director for European and NATO Policy in the Office of the Secretary of Defense in the Pentagon. In that capacity, Ms. Smith acted as the principal advisor to the Assistant Secretary of Defense for International Security Affairs for all matters falling within the broad spectrum of NATO and European policy. Her office managed the Department’s bilateral relationships with 31 European countries. In January 2012, she was awarded the Office of the Secretary of Defense Medal for Exceptional Public Service.

Peter Wittig has served as German Ambassador to the United States since April 2014. Prior to this, he was German Ambassador to the United Nations in New York and represented Germany during its tenure as a member of the UN Security Council in 2011 and 2012. There, he drew on his wide expertise in United Nations matters, having previously served as Director-General for United Nations and Global Issues at the German Foreign Office in Berlin. Ambassador Wittig joined the German Foreign Service in 1982. He has served at the Embassy in Madrid; as private secretary to the Foreign Minister at the headquarters, then located in Bonn; and as Ambassador in Lebanon and in Cyprus. He was the German Government Special Envoy on the “Cyprus question” (the division of Cyprus).

Ambassador (Ret.) Nicholas Burns is the Roy and Barbara Goodman Family Professor of the Practice of Diplomacy and International Relations at the Harvard Kennedy School of Government. He is Faculty Director of the Future of Diplomacy Project and Faculty Chair of the programs on the Middle East and South Asia. He is Director of the Aspen Strategy Group and a Senior Counselor at the Cohen Group. From 2014-2016, he was a member of Secretary of State John Kerry’s Foreign Affairs Policy Board at the U.S. Department of State. He served in the United States Foreign Service for twenty-seven years until his retirement in April 2008. He was Under Secretary of State for Political Affairs from 2005 to 2008. Prior to that, he was Ambassador to NATO (2001-2005), Ambassador to Greece (1997-2001), and State Department Spokesman (1995-1997). He worked on the National Security Council staff where he was Senior Director for Russia, Ukraine and Eurasia Affairs and Special Assistant to President Clinton and, before that, Director for Soviet Affairs for President George H.W. Bush. Earlier in his career, he worked at the American Consulate General in Jerusalem and in the American Embassies in Egypt and Mauritania. He serves on the Board of several corporate and non-profit organizations.

Douglas W. Elmendorf is Dean of the John F. Kennedy School of Government at Harvard University, where he also serves as the Don K. Price Professor of Public Policy.Doug Elmendorf served as the director of the Congr essional Budget Office from January 2009 through March 2015. Prior to joining CBO, he was at Brookings, where he was a senior fellow, the Edward M. Bernstein Scholar, and the director of The Hamilton Project. He was previously an assistant professor at Harvard University, a principal analyst at CBO, a senior economist at the White House’s Council of Economic Advisers, a deputy assistant secretary for economic policy at the Treasury Department, and an assistant director of the Division of Research and Statistics at the Federal Reserve Board. In those positions, he worked on budget policy, health care issues, the macroeconomic effects of fiscal policy, Social Security, income security programs, financial markets, macroeconomic analysis and forecasting, and other topics.Doug Elmendorf earned his Ph.D. and A.M. in economics from Harvard University, where he was a National Science Foundation graduate fellow, and his A.B. summa cum laude from Princeton University.

The Project on Europe and the Transatlantic Relationship aims to strengthen the University’s capacities for teaching, research, and policy on the relationship between the U.S. and Europe.

The project will kick off its launch on April 24th by hosting a forum and half-day conference to reflect on the most pressing questions raised by the current state of the transatlantic relationship.