North Korea’s Information and Technology: The Inflow of Foreign Content and the Regime’s Countermeasures

The North Korean regime has traditionally controlled information production, circulation, and consumption. However, over the years, foreign information and content have continued to trickle into the country. This phenomenon has major social and foreign policy implications. Our panelists will discuss how outside actors are getting content into North Korea, how the regime has responded with countermeasures, what kind of macro and micro impact foreign information consumption has on North Korean society, and why these trends are consequential.

Join us for this Zoom Webinar event. 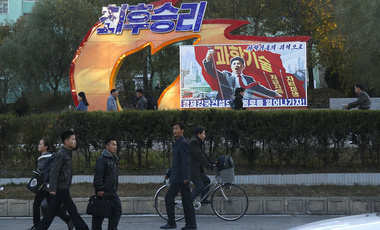 AP Photo/Dita Alangkara
In this Saturday, Oct. 27, 2018 photo, people walk past a propaganda banner that reads "Final victory! With science and technology we build our economic power" in Pyongyang, North Korea.

Dr. Jieun Baek (Panelist)
Dr. Jieun Baek is the author of North Korea’s Hidden Revolution: How the Information Underground is Transforming a Closed Society. She is the founder and co-director of Lumen, a non-profit organization that works to make information available to all North Koreans. She returned to the Belfer Center in November 2020 to focus on North Korea policy. Prior to receiving her doctorate in Public Policy at the University of Oxford, she was a research fellow at the Belfer Center, and worked at Google headquarters for several years. Dr. Baek received her bachelor’s and master’s degrees from Harvard. She is a proud Los Angeles native. Visit her at www.JieunBaek.com.

Markus Garlauskas (Panelist)
Markus Garlauskas is an independent author, consultant, and strategist. He is a member of the advisory board of Lumen, is a nonresident senior fellow with the Scowcroft Center for Strategy and Security of the Atlantic Council, and is an adjunct professor in Georgetown University’s Security Studies Program. Before his term as a member of the Senior National Intelligence Service concluded in June 2020, he served for nearly twenty years in the US government. He spent almost twelve years in Seoul on the staff of US Forces Korea, Combined Forces Command, and United Nations Command, including time as Chief of Intelligence Estimates, and later as the Director of Strategy. After returning from Korea, he served as the National Intelligence Officer for North Korea, leading the US intelligence community’s strategic analysis of North Korea from July 2014 to June 2020. He tweets at @Mister_G_2.

Geum-Hyok Kim (Panelist)
Geum-Hyok Kim is from Pyongyang, North Korea. He was born in 1991. He grew up as part of North Korea’s elite class and attended Kim Il-Sung University. Geum Hyok was exposed to foreign media at a young age and in middle school was detained and punished for distributing DVDs with South Korean and American media content. He later had an opportunity to study in Beijing where he met South Koreans and other foreigners, and was able to learn about the outside world. He defected in Beijing in 2012 and today is studying politics and diplomacy at Korea University.

Nat Kretchun (Panelist)
Nat Kretchun is the Vice President for Programs at the Open Technology Fund (OTF), a congressionally funded non-profit organization that funds the development and deployment of circumvention and security technologies for populations living in repressive censorship and surveillance environments. Mr. Kretchun oversees operations of OTF’s multi-million dollar funding portfolio. He previously served as a senior associate director at InterMedia, where he managed quantitative and qualitative research projects with a focus on Asia and hard-to-access populations. He has designed, fielded, and analyzed studies ranging from large-scale nationally representative surveys of China to qualitative studies examining digital communication patterns among Uyghur populations. Since 2009, Mr. Kretchun has conducted extensive research with North Korean refugees, defectors, and travelers; run annual surveys; and conducted qualitative studies for a number of government and non-government clients. Mr. Kretchun is the primary author of “A Quiet Opening: North Koreans in a Changing Media Environment” and its follow-up, “Compromising Connectivity: Information Dynamics Between the State and Society in a Digitizing North Korea.”

Dr. John Park (Moderator)
Dr. John Park is Director of the Korea Project at the Harvard Kennedy School’s Belfer Center. He is also a Faculty Affiliate with the Project on Managing the Atom at the Harvard Kennedy School and an Associated Faculty Member of the Korea Institute at Harvard University. Dr. Park’s core research projects focus on the political economy of the Korean Peninsula, nuclear proliferation, economic statecraft, Asian trade negotiations, and North Korean cyber activities. He previously directed Northeast Asia Track 1.5 projects at the U.S. Institute of Peace. He advises Northeast Asia policy-focused officials in the US government. Dr. Park earlier worked at Goldman Sachs and The Boston Consulting Group. Dr. Park received his Ph.D. from the University of Cambridge. He completed his predoctoral and postdoctoral training at the Harvard Kennedy School.

Sushma Raman (Opening Remarks)
Sushma Raman is the Executive Director of the Carr Center for Human Rights Policy. She brings over two decades of global experience launching, scaling, and leading social justice and philanthropic programs and collaboratives, building capabilities of grassroots human rights organizations and their leaders, and teaching graduate courses in the public policy schools at UCLA, USC, and Harvard Kennedy School. Sushma has worked at the Ford Foundation, where she managed a $100 million global program (the second largest in the Foundation’s history at that time) where she helped launch and scale social justice and women’s funds around the world, and at the Open Society Foundation, where she was a Program Officer on the founding staff for US Programs, staffing a $50 million fund established by philanthropist George Soros to support immigrant and refugee rights. Sushma is the co-author, along with Bill Schulz, of the bookThe Coming Good Society: Why New Realities Demand New Rights, released by Harvard University Press in June 2020. Sushma has a B.A. in Economics from Smith College, a M.A. in African Studies from UCLA, and a mid-career MPA from the Harvard Kennedy School, where she was awarded the Lucius N. Littauer Fellowship for her academic and leadership achievements.

Martyn Williams (Panelist)
Martyn Williams is a Fellow at the Stimson Center in Washington, DC, where he works on 38 North. He has been watching North Korean technology for the last 20 years and is founder of the North Korea Tech blog. In 2019 he authored “Digital Trenches: North Korea’s Information Counter-Offensive” for the Committee on Human Rights in North Korea on the state’s response to the inflow of foreign information and technology. He was a Knight Journalism Fellow at Stanford University. Before moving to the United States, he lived in Japan for 16 years where he was Tokyo Bureau Chief for IDG News Service.