Ongoing Crisis in Syria: The Destruction of the Syrian State and the Changing Face of Conflict 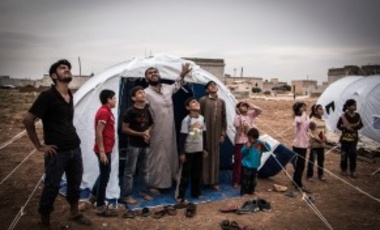 AP Images
Displaced Syrians watching a Russian war plane above a camp on the southern outskirts of the northern Syrian city of Aleppo on October 22, 2015.

Michael Wahid Hanna is a senior fellow at The Century Foundation and an adjunct senior fellow at the Center on Law and Security at New York University School of Law. He works on issues of international security, international law, and U.S. foreign policy in the Middle East and South Asia. Hanna directed The Century Foundation's 2015 International Working Group on Pakistan, chaired by Ambassador Thomas Pickering, and served as a co-director of The Century Foundation's 2011 International Task Force on Afghanistan, co-chaired by Ambassador Pickering and Ambassador Lakhdar Brahimi. He has published widely on U.S. foreign policy in newspapers and journals, including articles in the New York Times, the Los Angeles Times, the Boston Globe, Christian Science Monitor, the New Republic, Foreign Affairs, Survival, Democracy, Middle East Report, and World Policy Journal, among other publications, and is a frequent contributor to Foreign Policy. He appears regularly on PBS, BBC, and NPR, including appearances on the Charlie Rose Show and PBS Newshour. He served as a consultant for Human Rights Watch in Baghdad in 2008. Prior to joining The Century Foundation, Hanna was a senior fellow at the International Human Rights Law Institute. From 1999 to 2004, Hanna practiced corporate law with the New York law firm Cleary, Gottlieb, Steen & Hamilton. Fluent in Arabic, he was a Fulbright Scholar at Cairo University. He received a J.D. from New York University School of Law, where he was an editor of the Law Review. Hanna is a member of the International Institute for Strategic Studies and was a term-member of the Council on Foreign Relations.

Co-sponsored by the Center for European Studies Eastern Mediterranean and Europe Study Group, the Iran Project, and the WCFIA/CMES Middle East Seminar.