Please join the Future of Diplomacy Project for a conversation with former U.S. Secretary of State, Madeleine Albright; Global Head of Sustainability and Inclusive Growth at Goldman Sachs, Dina Powell McCormick; and Ezinne Uzo-Okoro, Harvard Kennedy School midcareer student (2021) and the Assistant Director for Space Policy in the White House Office of Science and Technology Policy, who have all recently been featured in President George W. Bush’s new book Out of Many, One: Portraits of America's Immigrants, a collection of 43 portraits painted by the former President with accompanying stories that exemplify the promise of America. They will share how their experiences as a refugee and as immigrants have shaped their views on America’s role in the world and influenced their careers in public service.  Professor Nicholas Burns will moderate the discussion. 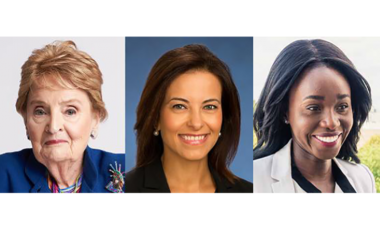 Madeleine K. Albright is a professor, author, diplomat and businesswoman who served as the 64th Secretary of State of the United States. Dr. Albright received the Presidential Medal of Freedom, the nation’s highest civilian honor, from President Obama on May 29, 2012.
In 1997, Dr. Albright was named the first female Secretary of State and became, at that time, the highest ranking woman in the history of the U.S. government. As Secretary of State, Dr. Albright reinforced America’s alliances, advocated for democracy and human rights, and promoted American trade, business, labor, and environmental standards abroad. From 1993 to 1997, Dr. Albright served as the U.S. Permanent Representative to the United Nations and was a member of the President’s Cabinet. From 1989 to 1992, she served as President of the Center for National Policy. Previously, she was a member of President Jimmy Carter’s National Security Council and White House staff and served as Chief Legislative Assistant to U.S. Senator Edmund S. Muskie.

Dr. Albright is a Professor in the Practice of Diplomacy at the Georgetown University School of Foreign Service. Dr. Albright is Chair of Albright Stonebridge Group, a global strategy firm, and Chair of Albright Capital Management LLC, an investment advisory firm focused on emerging markets. She also chairs the National Democratic Institute, serves as the president of the Truman Scholarship Foundation and is Honorary Chair of the World Refugee & Migration Council.

Dr. Albright is a seven-time New York Times bestselling author. Her most recent book, Hell and Other Destinations was published in April 2020. Her other books include: her autobiography, Madam Secretary: A Memoir (2003); The Mighty and the Almighty: Reflections on America, God, and World Affairs (2006); Memo to the President: How We Can Restore America's Reputation and Leadership (2008); Read My Pins: Stories from a Diplomat’s Jewel Box (2009); Prague Winter: A Personal Story of Remembrance and War, 1937-1948 (2012), and Fascism: A Warning (2018).

Dr. Albright received a B.A. with Honors from Wellesley College, and Master’s and Doctorate
degrees from Columbia University’s Department of Public Law and Government, as well as a
Certificate from its Russian Institute. She is based in Washington, DC.

Dina Powell McCormick is global head of sustainability and inclusive growth at Goldman Sachs. In this role, she partners with leaders globally to advance our sustainability efforts across all of our businesses. Dina is also global head of the firm’s sovereign business, responsible for helping build and enhance the firm's relationships with global sovereign clients. She serves on the Management Committee and the Firmwide Client and Business Standards Committee.

Dina rejoined Goldman Sachs in 2018 as a partner in the Investment Banking Division after serving as the US Deputy National Security Advisor for Strategy from 2017 to 2018. Dina initially joined the firm in 2007, and from 2007 to 2017, she led the Impact Investing Business and the Environmental Markets Group, which deployed more than $5 billion in market-based loans and equity to drive sustainable economic development and revitalize under-served communities. During this same period, she was also president of The Goldman Sachs Foundation, developing and overseeing two major initiatives to drive economic growth and opportunity — 10,000 Women and 10,000 Small Businesses — that successfully provided business education and capital to women and small businesses, respectively.

Dina is currently a non-resident Senior Fellow at the Future of Diplomacy Project at Harvard Kennedy School’s Belfer Center for Science and International Affairs.

Ezinne Uzo-Okoro is a Mid-Career MPA candidate at the Harvard Kennedy School. She has contributed to 63 spaceflight programs in over 16 years representing $9.5 Billion in total program value to NASA. She managed a $300M program, led national and international teams (including expeditions to Svalbard) and currently serves as the Assistant Director for Space Policy in the White House Office of Science and Technology Policy. She holds a B.S. in Computer Science from Rensselaer Polytechnic Institute and two M.S. in Space Systems and Space Robotics from Johns Hopkins University (APL) and the MIT Media Lab respectively. She is also an MIT AeroAstro Ph.D. candidate. She was a 2018 Presidential Leadership Scholar. She is currently a term member of the Council on Foreign Relations, an MIT Legatum Fellow and a HKS CPL Dubin Fellow.