A conversation with Fadhel Kaboub, Research Associate at the Center for International Development. 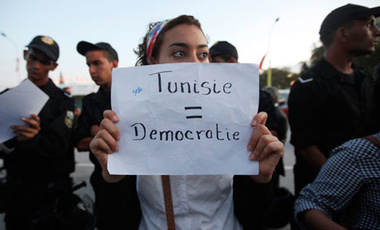 A conversation with Fadhel Kaboub, Research Associate at the Center for International Development.

Dr. Fadhel Kaboub is Assistant Professor of economics at Denison University (OH) and Research Associate at the John F. Kennedy School of Government at Harvard University (MA), Levy Economics Institute of Bard College (NY), the Center for Full Employment and Price Stability (MO), and the International Economic Policy Institute (Ontario, Canada). He has taught at Drew University (NJ), where he was also co-director of the Wall Street Semester Program; the University of Missouri–Kansas City (UMKC); and Bard College at Simon’s Rock (MA).

Dr. Kaboub’s research is in the Post Keynesian and Institutionalist tradition in the fields of macroeconomic theory and policy, monetary theory and policy, and economic development, with a particular emphasis on job creation programs and social justice through full employment. His recent work focuses on the Political Economy of the Uprisings in the Middle East.

Dr. Kaboub's regional expertise is on the economies of the United States and the Middle East and North Africa (especially Tunisia). His work has been published in the Journal of Economic Issues, Review of Radical Political Economics, Review of Social Economy, International Journal of Political Economy, and International Labour Review. He is also a regular contributor to the social justice column published by Street Speech, a newspaper of the Columbus Coalition for the Homeless.

He has been a member of the editorial board of the Review of Radical Political Economics since 2006, and has been the book review editor of the Heterodox Economics Newsletter since 2007.

Dr. Kaboub is the program coordinator of the Denison Volunteer Dollars (DVD) program, which has provided more than 1,700 hours of community service since September 2008. He is the recipient of the DCA Faculty and Staff Commitment to Service Award (April 2011), and is the 2011-2012 Bartlett Family Pre-Tenure Fellow.