"The Politics of Infighting: Conflict Among Rebel Groups and the Civil War in Syria" with Jonah Schulhofer-Wohl 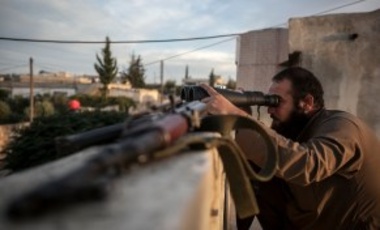 AP Images
A Syrian opposition fighter watches over as heavy fighting breaks out in in the Idlib province countryside.

The rise of ISIS and the discord and deadly rivalries plaguing the side of the rebels seem to vindicate the wait-and-see approach to the Syrian civil war favored by many American policy-makers and commentators. Infighting in civil wars is often seen as the result of ideological incompatibilities, competition over scare resources, or personality conflicts between leaders.  However, Jonah Schulhofer-Wohl, Assistant Professor of Politics at the University of Virginia, points to a systematic misunderstanding of how armed groups come to fight against their putative allies in civil wars.  He develops a political theory of infighting which stresses the trade-off armed groups make during war between short-term survival and the long-term pursuit of political power. Prof. Schulhofer-Wohl tests this account against the behavior of Syrian rebel groups from 2011 to 2013. He uses disaggregated data on fatalities to place the presence or absence of infighting within the context of the threat rebel groups faced from the al-Assad regime. The results shed light on the ways in which the military progress of civil war can produce infighting. In Syria, the chaotic relationships between rebel groups should be understood as rational responses to the changing military environment rather than as signs of inherent, problematic characteristics of the groups. One implication is that the U.S. has had the ability to promote the emergence of a more cohesive armed opposition by acting to reshape the military balance between the regime and the rebels.

Jonah Schulhofer-Wohl is Assistant Professor in the Woodrow Wilson Department of Politics at the University of Virginia. He specializes in civil wars and the Middle East, and is particularly interested in the effect of external assistance on the dynamics of civil conflict. He has published scholarly articles in journals such as Science and International Security, and has spoken and written on the Arab Uprisings and the Syrian Civil War, including in the Washington Post’s blog The Monkey Cage. Prof. Schulhofer-Wohl's broader research interests include politics, development, and economic growth in the Middle East.