The Politics of Preachers: Understanding Clerical Participation in Iraqi Protests 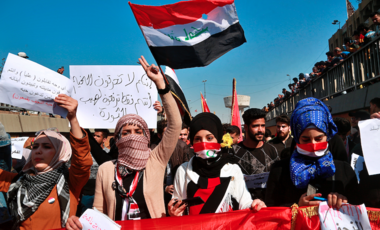 The Shi’a religious establishment of Iraq has an extensive history of political engagement in both formal and informal politics, including protest. This talk will explore the determinants of clerical participation in anti-government protest throughout Iraqi history and examine when Shi’a clerics are leaders of protest and when they are followers. It draws upon extensive fieldwork in Iraqi seminaries to identify mechanisms of clerical engagement in politics and to dispel the myth of Shi’a clerics as instigators of protest. It applies this theory to both historic instances of protest as well as on-going events in Iraq today.

Marsin Alshamary is a Pre-doctoral Research Fellow at the Middle East Initiative. She is a PhD candidate in the Department of Political Science at Massachusetts Institute of Technology where she is also part of the Security Studies Program. She is generally interested in the intersection of religion and politics in the Middle East, with a particular focus on clerical involvement in the formal and informal politics. Her dissertation explores the role of religious leaders in anti-government protest in Iraq. Her research has been supported by fellowships from the Project on Middle East Political Science and the Center for International Studies at MIT. She holds a BA from Wellesley College, where she was an Albright Fellow.