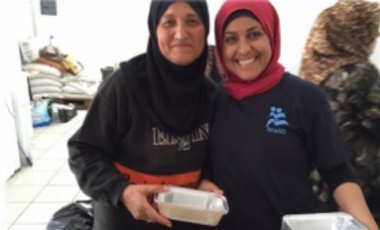 Join us for a lecture and group discussion led by Yotam Polizer of IsraAID, who will discuss his team’s experience working with refugees in Greece, Germany, and Northern Iraq.

Mr. Polizer directs the global partnership program of IsraAID – Israel’s biggest humanitarian NGO. Following the September 2015 refugee crisis in Europe, he led IsraAID’s humanitarian mission in Lesbos, Greece, to support Syrian refugees on the island and also established IsraAID Germany, which provides long-term support for Yazidi and Syrian refugees in Germany. His presentation will draw from these experiences.

Co-sponsored by the Program on Crisis Leadership (Ash and Taubman Centers) at Harvard Kennedy School and the Harvard Humanitarian Initiative.

During the last four years, Polizer has also built and led psycho-education programs in Japan after the 2011 earthquake and tsunami, in the Philippines after Typhoon Haiyan in 2013, and in South Korea to support the reintegration of North Korean defectors. He has also led missions in Nepal following the 2015 Gorkha Earthquake and in Sierra Leone for Ebola survivors, health workers, and affected communities. He has more than 10 years’ experience in education, humanitarian aid, and international development.

About Yotam Polizer: Born and raised in a small village in Northern Israel, Yotam has been a social activist from a young age, and today boasts more than 10 years of experience in humanitarian projects around the world.

Yotam began his social activism working with juvenile delinquents in a rehabilitation center. His achievements include launching a ground-breaking program to pair Israeli army volunteers with special-needs children, as well as a youth leadership and community development project in Bedouin villages of Israel’s Negev desert in 2007, Yotam joined the Tevel B’Tzedek’s development project in Nepal, where he spent three and a half years as a Project Coordinator. During this time, he was also employed by the Israeli Embassy as Consular Assistant. He joined IsraAID following the 2011 Earthquake and Tsunami in Japan, where he served as Japan Country Director for 3 years. Following 2 years as Asia Regional Director, Yotam is now the Development Director, overseeing all of IsraAID's strategic partnerships around the world.