Remote Sensing Religiosity in the Muslim World: An Initial Assessment in the Turkish Case

A seminar with Avital Livny, Assistant Professor of Political Science, University of Illinois at Urbana-Champaign. 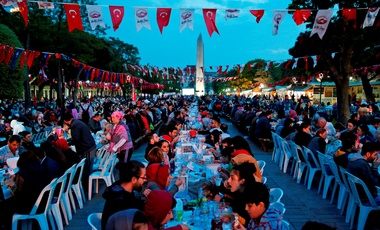 AP Photo/Lefteris Pitarakis
People break their fast in the historic Sultanahmet district of Istanbul, Saturday, May 27, 2017 on the first day of the fasting month of Ramadan.

A seminar with Avital Livny, Assistant Professor of Political Science, University of Illinois at Urbana-Champaign.

Models of human behavior in the social sciences depend on estimating individuals’ values and preferences, including their religiosity. Most existing measures rely on survey data, but these may suffer from sample-selection and response biases and, even where error-free, are rarely available at consistent temporal intervals and appropriate geospatial scale. As such, an estimate of religiosity that does not rely on direct questioning and is available for smaller geographic units at regular intervals is strictly preferred. Following the growing use of remote sensing in the social sciences, an alternative measure is proposed for Muslim-majority areas: changes in night-time luminosity during the holy month of Ramadan, as captured in satellite images. Because observant Muslims abstain fast during daylight hours throughout Ramadan, they gather with friends and family after sunset to eat, drink, and celebrate, increasing the intensity of night-lights in more religious communities; at the same time, implicit and explicit pressures against secular night-time activities during the holy month could lead to fewer lights on in less observant areas. In this presentation, the inter-temporal reliability between 2017-2018 and cross-sectional validity of the measure is assessed and confirmed, the latter using a series of nationally representative surveys in 559 Turkish districts (ilceler).

Prof. Avital Livny received her B.A. from Washington University in St. Louis in Political Science, History, and Near Eastern Studies, and worked as a Policy Assistant for Legal Momentum (formerly NOW Legal Defense and Education Fund) before beginning her graduate studies. She earned an M.Phil. in Modern Middle Eastern Studies and an M.Sc. in Comparative Politics Research from the University of Oxford before completing an M.A. and Ph.D. in Political Science at Stanford University.

Prof. Livny spent AY 2014-2015 as a Junior Research Fellow at the Carlos III-Juan March Institute in Madrid before beginning as an Assistant Professor at the University of Illinois at Urbana-Champaign. She is spending AY 2018-2019 as a Faculty Fellow at the Center for Advanced Study at the University of Illinois and previously spent AY 2016-2017 and 2017-2018 as a Linowes Faculty Fellow at the Cline Center for Advanced Social Research. Recently, she was awarded a grant from the National Science Foundation to support her project entitled "Improving and Integrating Global Diversity Estimates Using Transparent Methods." Her dissertation research is due to be published in 2019 by Cambridge University Press as a book entitled Trust and the Islamic Advantage in Turkey and the  Muslim World.