A seminar with Benjamin Smith, Associate Professor of Political Science and Research Foundation Professor at the University of Florida. 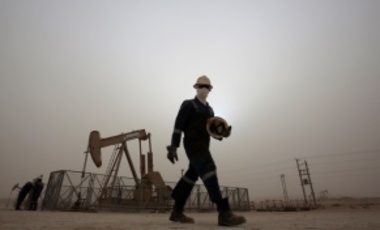 AP Images
An oil worker walks by an oil pump during a sandstorm that blew in, in the desert oil fields of Sakhir, Bahrain.

A seminar with Benjamin Smith, Associate Professor of Political Science and Research Foundation Professor at the University of Florida.

Dr. Smith will present his research on the "resource curse" and present a new indicator for oil dependence—a concept he terms rent leverage.  It captures the share of individuals’ buying power that directly depends on fuel income (and that nearly everywhere is controlled by political leaders) and suggests that rent leverage and fuel income strongly stabilize rulers of all types against regime change.

Benjamin Smith is Research Foundation Professor and Associate Professor of Political Science at the University of Florida. From 2002-2004 he was an Academy Scholar at the Harvard Academy for International and Area Studies. His first book, Hard Times in the Lands of Plenty, was published in 2007 by Cornell University Press. Smith's research focuses on ethnic conflicts and on the politics of resource wealth and has been published, among other venues, in World Politics, The American Journal of Political Science, Perspectives on Politics, World Development, and Conflict Management and Peace Science. It has been funded by the National Science Foundation, the Social Science Research Council, the Harry Frank Guggenheim Foundation, and the Ford Foundation.