"The Resurgence of Egypt's 'Deep State'?" with Samer Shehata 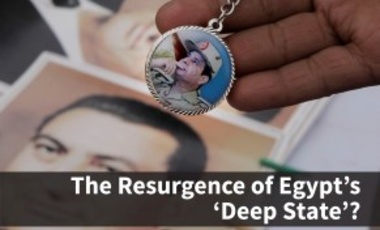 Study Group participants are encouraged to buy the following book. This seminar will focus on topics covered in Chapter 2 of the book:

Samer S. Shehata is an Associate Professor of Middle East studies and the Middle East Studies Coordinator in the Department of International and Area Studies at the University of Oklahoma. He has taught at Columbia, New York University, Georgetown University and the American University in Cairo. He is the author of Shop Floor Culture and Politics in Egypt (2009) and the editor of Islamist Politics in the Middle East: Movements and Change (2012). His articles have appeared in the International Journal of Middle East Studies, Current History, MERIP, Middle East Policy, Folklore and as book chapters and encyclopedia articles. His analysis has been published in the New York Times, Boston Globe/International Herald Tribune, Salon, Slate, Arab Reform Bulletin, Al Hayat, Al Ahram Weekly and other publications.He has received numerous fellowships, including from the Social Science Research Council, the Ford Foundation’s Middle East Research Competition, National Endowment for the Humanities, the Woodrow Wilson International Center for Scholars, and the Carnegie Foundation. Dr. Shehata has been interviewed by a wide range of media including CNN, BBC, PBS News Hour, NPR, Al Jazeera, New York Times, and many other outlets. He received a B.A. from the University of California at Berkeley, an M.Phil. from the University of Cambridge, and a Ph.D. (Politics) from Princeton University, where his dissertation won the Malcolm H. Kerr Award from the Middle East Studies Association.