Retribution or Reconciliation? Attitudes Toward Rebel Collaborators in Iraq 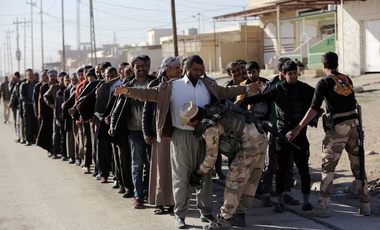 AP Photo/Hussein Malla
Iraqi soldiers searched scores of Iraqi male residents who were rounded up in Mosul's Gogjali neighborhood on Thursday, Nov. 24, 2016. Iraqi forces urged them to come out with information of any Islamic State members among them. An Iraqi officer addressed the group, demanding to know the whereabouts of alleged IS militants who opened fire on troops a few days earlier.

Rebel groups require the cooperation of many civilians who are commonly perceived as “collaborators” after conflict ends. The limited empirical work in this area focuses on fighters, ignoring the need for more nuanced understandings of proportional justice for civilian collaborators. Through a survey experiment in an Iraqi city that experienced governance by the Islamic State, we find that social identity—expected to trigger in-group favoritism—is a weak determinant of preferences for punishment and forgiveness compared to the type of collaboration itself. Our results also fail to provide support for the hypothesis that exposure to violence drives a desire for revenge. Instead, the perceived volition behind an act is important, although its effect varies depending on the type of collaboration. This research offers uniquely fine-grained data and insights into the factors that shape perceptions of individual rebel culpability, with important policy implications for balancing accountability with the need for reconciliation. Further work in Iraq that builds upon these findings will also be discussed at this talk.

Kristen Kao received her PhD in Political Science from the University of California, Los Angeles (UCLA). She is a Postdoctoral Research Fellow with the Program on Governance and Local Development (GLD) at the University of Gothenburg, where she contributes her expertise in survey methodology, experimental design, and quantitative methods to a team of researchers in conducting large-N, locally representative surveys (5,000+) in the developing world. Since 2006 she has been studying Arabic and conducting fieldwork in the Middle East in places as diverse as Syria, Kuwait, Jordan, Lebanon, Oman, Tunisia, and Egypt. More recent fieldwork in Malawi, Zambia, and Kenya yielded three surveys of 25,000+ respondents examining the interaction of social institutions and local governance across urban and rural settings. Her recently funded projects include a multi-method, comparative study of the integration of Syrian migrants into Jordan, Turkey, and Sweden as well as a study on the drivers of forgiveness versus revenge among diverse groups in Iraq employing surveys and experiments. Kristen’s research has received funding from the National Science Foundation, the Fulbright Scholar Program, the Swedish Research Council, the Social Science Research Council, and the American Political Science Association, among others. She has published in Comparative Politics, Survey Practice, The Washington Post, and Carnegie’s Middle East blog Sada, among others. Her recent work on transitional justice has recently been invited for a revise and resubmit at the American Political Science Review.