The September 2019 Israeli Elections: What Does the Future Hold for Israelis and Palestinians? 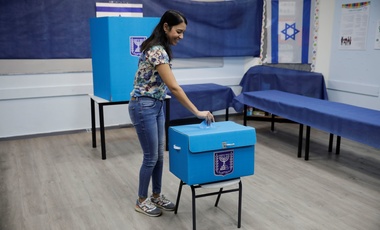 This panel will discuss the unfolding implications of Israel's September 2019 elections. Moderated by Yael Berda, the panel will feature Ruth Calderon, Rami Younis, and Nadav Shelef.

Ruth Calderon is a former Member of Knesset from the Yesh Atid party and Deputy Speaker of the Knesset (2013–2015), as well as an educator and academic Talmud scholar. In 1989 she established the Elul pluralistic beit midrash. In 1996 she founded Alma, the Home for Hebrew Culture. She served as the head of the Culture and Education Department at the National Library and as a faculty member of the Mandel Leadership Institute. She received her M.A. and Ph.D. in Talmud from the Hebrew University. In recognition of her work, she received the AVI CHAI Prize for Jewish Education, the Rothberg Prize in Jewish Education, and several honorary doctorates. She is currently the Caroline Zelaznik Gruss and Joseph S. Gruss Visiting Professor in Talmudic Civil Law at the Harvard Law School.

Rami Younis is a Palestinian writer and cultural activist from Lyd, who graduated from the Hebrew University in Jerusalem. He currently writes for the online magazine 972+ and serves as a writer and editor at its Hebrew sister site, Local Call. He is one of the founders of the Palestinian activist group Khotweh, which was active on the issues of home demolitions and Palestinian identity in Lyd and Ramleh, mixed Jewish-Arab cities in occupied Palestine. Younis served as a parliamentary consultant and spokesperson for the Palestinian member of the Knesset Haneen Zoabi. He is also a co-founder and manager of the first-ever Palestine Music Expo, an event that connects the Palestinian music scene to the worldwide industry.  Rami is currently co-directing and producing the documentary film “Lyd in Exile.” He is currently a Religion, Conflict, and Peace Initiative Fellow at the Harvard Divinity School's Religious Literacy Project.

Nadav Shelef is the Harvey M. Meyerhoff Professor of Israel Studies and Professor of Political Science and Jewish Studies at the University of Wisconsin, Madison. He is currently serving as the Associate Chair and Director of Graduate Studies in the Department of Political Science. Professor Shelef's research and teaching revolve around questions of nationalism, identity, territorial conflict, religion and politics, Israeli politics and society, and Middle East politics. His current projects focus on understanding how homelands change and the conditions under which religious parties moderate their positions.