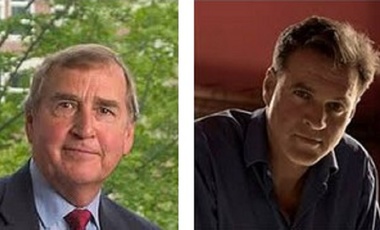 Allison and Ferguson
About

In this book talk, Professor Graham Allison argues that China and the United States are heading toward a war neither wants. The reason is Thucydides’s Trap, a deadly pattern of structural stress that results when a rising power challenges a ruling one. This phenomenon is as old as history itself. About the Peloponnesian War that devastated ancient Greece, the historian Thucydides explained: “It was the rise of Athens and the fear that this instilled in Sparta that made war inevitable.” Over the past 500 years, these conditions have occurred sixteen times. War broke out in twelve of them. Today, as an unstoppable China approaches an immovable America and both Xi Jinping and Donald Trump promise to make their countries “great again,” the seventeenth case looks grim. Unless China is willing to scale back its ambitions or Washington can accept becoming number two in the Pacific, a trade conflict, cyberattack, or accident at sea could soon escalate into all-out war. The comment will be provided by Niall Ferguson, Professor of History at Harvard University and a Senior Fellow at the Hoover Institution. More information available here.