A Strong Handoff in U.S.-India Relations

Please join the Future of Diplomacy Project for a conversation with Kenneth I. Juster, former U.S. Ambassador to India and HKS alumnus, about the U.S.-India relationship. Ambassador Juster will discuss major achievements in the U.S.-India partnership in the areas of diplomacy, defense, economic relations, energy, and health over the past four years as well as issues on the horizon such as the rise of China and trade policy. Dean of Harvard Kennedy School, Doug Elmendorf, will introduce Ambassador Juster, and Faculty Chair, Nicholas Burns will moderate this discussion. 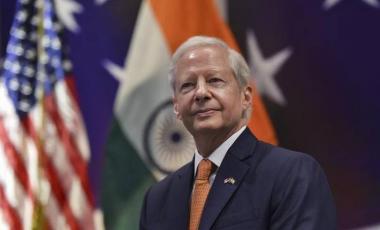 Kenneth I. Juster has over 40 years of experience as a senior government official, senior law partner, and senior business executive.

Juster served as the 25th United States Ambassador to the Republic of India from November 2017 to January 2021.  He was unanimously confirmed by the U.S. Senate.  He led the third largest U.S. Mission in the world, with four Consulates in addition to the Embassy, and approximately 2,500 employees representing over 30 U.S. government departments, agencies, and offices.  He was involved in a broad range of issues, including defense, trade and investment, energy, technology, aviation, health, agriculture, education, and space.  For his service, Juster received the highest honors of several U.S. government agencies, including the Department of State’s Distinguished Service Award, the Department of Defense’s Distinguished Public Service Award, the Director of National Intelligence’s Exceptional Service Award, and the Department of Energy’s Excellence Award.

Prior to that, Juster was a Partner and Managing Director, from 2010 to 2017, at the global investment firm Warburg Pincus, where he focused on a range of issues, including geopolitical risk, global public policy, and regulatory matters relating to the Firm’s investment activities and portfolio companies.  He also established the Firm’s environmental, social, and corporate governance program and worked on related initiatives with portfolio companies.  From 2005 to 2010, Juster was Executive Vice President of Law, Policy, and Corporate Strategy at salesforce.com, a software company that pioneered cloud computing for business enterprises.  He was a section 16(b) officer of the Company as well as a member of the Company’s executive committee, reporting directly to Chairman and CEO Marc Benioff.  Juster oversaw a series of functions at the company, including corporate development, legal affairs, global public policy, enterprise risk management, human resources, internal audit, worldwide real estate, and procurement.

Juster served as U.S. Under Secretary of Commerce from 2001 to 2005, in charge of the Bureau of Industry and Security.  In that capacity, he oversaw issues at the intersection of business and national security, including strategic trade controls, imports and foreign investments that affect U.S. security, enforcement of anti-boycott laws, and industry compliance with international arms control agreements.  Juster co-founded and served as the U.S. Chair of the U.S.-India High Technology Cooperation Group.  He was also one of the key architects of the Next Steps in Strategic Partnership initiative between the United States and India.  That initiative provided the foundation for the historic civil nuclear agreement between the two countries.  In addition, Juster was responsible to the negotiation and signing of the End-Use Visit Understanding between the United States and China, which enhanced the security of exports of U.S. high technology to China.  Upon completion of his term at the Commerce Department, Juster received the William C. Redfield Award, the Department’s highest honor.

From 1992 to 1993, Juster served as the Counselor (Acting) of the U.S. Department of State, and from 1989 to 1992 as the Deputy and Senior Adviser to Deputy Secretary of State Lawrence S. Eagleburger.  Juster was one of the key officials involved in establishing and managing U.S. assistance programs to Central and Eastern Europe and the former Soviet Union, including setting up the initial Enterprise Funds for the region.  On behalf of Secretary of State James A. Baker III, he organized the first Coordinating Conference on Assistance to the New Independent States (NIS) of the former Soviet Union, shortly after the collapse of the U.S.S.R., and led the first international delegation to meet with representatives of the NIS in Minsk, Belarus in February 1992.  Juster also was part of the five-man team, led by Deputy Secretary Eagleburger, that traveled to Israel prior to and during the first Gulf War to coordinate with the Israelis regarding their posture during that war.  Upon completion of his term at the State Department, Mr. Juster received the Distinguished Service Award, the Department’s highest honor.

From 1981 to 1989 and 1993 to 2001, Juster practiced law at the firm Arnold & Porter, where he became a senior partner.  His work involved international arbitration and litigation, corporate counseling, regulatory matters, and international trade and transactions.  Among his noteworthy cases was the representation of the Government of Panama-in-exile against the Noriega regime.  In that matter, he coordinated a broad legal strategy that secured the overseas assets of the Government of Panama and helped institute sanctions against the Noriega regime, which was eventually ousted from office.  The President of Panama subsequently awarded Juster the Vasco Núñez de Balboa en el Grado de Gran Cruz Decoration and Medal.

Juster also has served as a Visiting Fellow at Harvard’s Kennedy School of Government in 2010, a Member of the U.S. President’s Advisory Committee for Trade Policy and Negotiations from 2007 to 2010, a Visiting Fellow at the Council on Foreign Relations in 1993, a law clerk to Judge James L. Oakes of the U.S. Court of Appeals for the Second Circuit from 1980 to 1981, and at the National Security Council in 1978.  In addition, he has served as the Chairman of the Advisory Committee of Harvard’s Weatherhead Center for International Affairs, the Chairman of Freedom House, the Vice Chairman of the Asia Foundation, and a member of the Trilateral Commission.  He is currently a member of the Council on Foreign Relations, the American Academy of Diplomacy, and the Council of American Ambassadors.

Juster has published extensively on international economic and legal issues, including Making Economic Policy:  An Assessment of the National Economic Council (Brookings Institution, 1997) and “The Myth of Iraqgate” in Foreign Policy magazine (Spring 1994).  A Special Counsel appointed by the U.S. Attorney General subsequently investigated the so-called Iraqgate scandal and confirmed all elements of Juster’s analysis.

Juster holds a law degree from the Harvard Law School, a Master’s degree in Public Policy from the John F. Kennedy School of Government at Harvard, and a Bachelor of Arts degree in Government (Phi Beta Kappa) from Harvard College.  Juster was an AFS Exchange Student to Thailand in 1971.