Co-sponsored by the Belfer Center for Science and International Affairs. 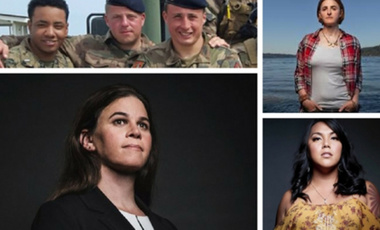 Over the past 20 years Brynn has held positions of leadership over diverse teams of people as a Lieutenant Commander (LCDR) in the United States Navy, and as a senior research scientist and project manager at the RAND Corporation and others in private industry. As an officer she was responsible for 28 people as Administrative Department Head to a squadron of over 430 sailors.

Outside of her professional career, LGBT research and policy issues have been her focus.  She was the lead author on the definitive study on transgender military service implementation for SPARTA, an LGBT service member’s organization. The policy currently implemented by the DoD closely mirrors what the SPARTA organization researched and recommended. While working for L-3 Communications she researched, documented, and presented the case for inclusion of transgender health benefits in the self-insured health plan. When L-3 added these benefits, it was the first time a Fortune 500 Human Rights Campaign Corporate Equality Index non-responding company had added health care for transgender employees.

She has written for the Huffington Post, The New Civil Rights Movement, USA Today, The Advocate, The Bilerico Project, and Salon, as well as numerous technical and policy papers for the RAND Corporation. Brynn Tannehill graduated from the United States Naval Academy in 1997 with a BS in computer science, and earned a MS in operations research from the Air Force Institute of Technology in 2008. She currently lives in Springfield VA with her wife and their three children.

Jennifer Peace enlisted in the military in 2005 and was commissioned in 2009 through the Officer Candidate School at Fort Benning, Georgia. While enlisted, she completed an overseas tour in South Korea, instructed at the intelligence electronic warfare maintainer course, and deployed to Baghdad, Iraq in 2008.

Upon commissioning, CPT Peace was first assigned to the 4th Infantry Division at Fort Carson, Colorado where she served as a signal platoon leader, infantry battalion tactical intelligence officer, and the brigade intelligence planner. She graduated the Military Intelligence Captains Career Course as the Distinguished Honor Graduate and was assigned at Fort Bliss, Texas as a Security Forces Advisory and Assistance Intelligence Officer. In 2014 CPT Peace was assigned to Fort Lewis, Washington where she was assigned as an Infantry Battalion Intelligence Officer. She is currently serving a Company Commander for Headquarters, 189th Combined Arms Training Brigade.

Jennifer Peace has been married to her wife, Deborah Peace, for 13 years and they have three children; Autumn, 11, Alexander, 9 and Amelia, 4.

Captain Moshe Avi serves as a Civil Affairs Officer in the Reserves, station in Washington, D.C. A native of Queens, New York, he graduated from Valley Forge Military College with an Associate of Art in Humanities and the University of Tampa with a Bachelors Degree in Criminology. In 2012, he received his commission through Officer Candidate School.

Captain Avi served four years on active duty as a Direct Air Support Control Officer. His position was vital to the controlling of aircrafts, integration of fire support, and the processing of immediate requests for targets and casualty evacuations. He additionally served as a Marine Liaison Officer for the Marine Air Ground Task Force, Data Platoon Commander, Adjutant, and Equal Opportunity Representative for the unit while concurrently achieving tactical proficiency as a Tactical Air Director, Helicopter Director, and Air Support Liaison Team Officer in Charge.

After completing his active duty tour, Captain Avi transferred to the reserves as a Civil Affairs Officer to support civil-military operations. His tactical and technical expertise assist in minimizing the impact of military operations on the civilian population, identifying and leveraging components in the civil dimension in support of foreign policy objectives.

Veteran Laila Ireland is a retired Healthcare Management and Administration Specialist and served for 12 years in the United States Army. She served two combat tours in Iraq and her final duty station was at Tripler Army Medical Center, Hawaii where she was honorably discharged and medically retired in November 2015. The American Military Partners Association presented Laila with their “Military Spouse Leadership Award" in 2016 and she is the 2017 Military Spouse of the Year on Peterson Air Force Base, Colorado.

Laila’s activism began in 2012 with the LGBT military advocacy organizations OutServe Trans and SPART*A. Through these groups she talks about the intersections of being transgender, female, and a person of color, while actively serving in the military.

On June 4, 2015 Laila and her then fiancé, SSgt Logan Ireland, courageously came out as transgender service members by sharing their story in the Emmy®-nominated New York Times short film "Transgender, at War and in Love.” The film highlights their struggles as a military couple who are both transgender as a way of advocating to change the policies banning their service. Their story become one of The Times' most viewed online short films and garnered Laila and Logan’s invitation to The White House Pride Reception to meet President Barack Obama. The film won The White House News Photographers Association's “Best Documentary,” was nominated for a GLAAD Award and was a 2016 Emmy® nominee for "Outstanding Short Documentary." More of Logan and Laila’s story will be featured in the forthcoming documentary, “TransMilitary.”

Today, Laila advocates for transgender equality by speaking in schools and businesses across our nation. She serves as the Membership Director to SPART*A Trans; an organization of over 600+ members established and operated for and by trans* military individuals, and she is a board member for Point of Pride, which empowers trans people all over the world through gender-confirming support programs. Laila currently resides with her husband at Peterson Air Force Base, Colorado.

Archon Fung is the Academic Dean and Ford Foundation Professor of Democracy and Citizenship at the Harvard Kennedy School. His research explores policies, practices, and institutional designs that deepen the quality of democratic governance. He focuses upon public participation, deliberation, and transparency. He co-directs the Transparency Policy Project and leads democratic governance programs of the Ash Center for Democratic Governance and Innovation at the Kennedy School. His books include Full Disclosure: The Perils and Promise of Transparency (Cambridge University Press, with Mary Graham and David Weil) and Empowered Participation: Reinventing Urban Democracy (Princeton University Press). He has authored five books, four edited collections, and over fifty articles appearing in professional journals. He received two S.B.s — in philosophy and physics — and his Ph.D. in political science from MIT.