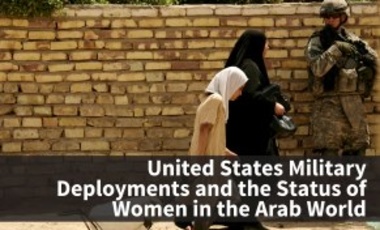 AP Images
An Iraqi woman and girl pass a U.S. Army soldier as he patrols in the Shiite stronghold of Sadr City in Baghdad, Iraq.

Arab regimes play a critical role in securing women's rights in their societies. Yet, regimes remain concerned about domestic, especially Islamist and traditionalist, reactions to women's rights. When regimes feel they can overcome this resistance they abide by prior commitments to women's rights. When they believe they will face more domestic opposition they are less likely to stand behind women's rights. In this paper, we argue that Arab regimes are less likely to overcome domestic resistance to women's rights when US intervention increases in the region. Such intervention is through the results of US involvement in wars, military intervention, or the promotion of policies that are unpopular among the populace. Here we examine one particularly visible dimension of this intervention—the deployment of US military troops—as a factor that increases domestic resistance to regimes, and thus by implication also harms the status of women in the Arab World.

Study Group participants are encouraged to buy or loan the following book. This seminar will focus on topics covered in Chapter 11 of the book:

Additional Readings: To be determined.

Amaney A. Jamal is the Edward S. Sanford Professor of Politics at Princeton University and director of the Mamdouha S. Bobst Center for Peace and Justice. Jamal also directs the Workshop on Arab Political Development. She currently is President of the Association of Middle East Women’s Studies (AMEWS). The focus of her current research is democratization and the politics of civic engagement in the Arab world. Her interests also include the study of Muslim and Arab Americans and the pathways that structure their patterns of civic engagement in the U.S. Jamal’s books include Barriers to Democracy, which explores the role of civic associations in promoting democratic effects in the Arab world (winner 2008 APSA Best Book Award in comparative democratization); and, as coauthor, Race and Arab Americans Before and After 9/11: From Invisible Citizens to Visible Subjects (2007) and Citizenship and Crisis: Arab Detroit after 9/11 (2009). Her most recent book Of Empires and Citizens was published by Princeton University Press, Fall 2012. In addition to her role as director of Princeton’s Workshop on Arab Political Development, Jamal is a co-director of Princeton’s Luce Project on Migration, Participation, and Democratic Governance in the U.S., Europe, and the Muslim World; principal investigator of the Arab Barometer Project, winner of the Best Dataset in the Field of Comparative Politics( Lijphart/Przeworski/Verba Dataset Award 2010); co-PI of the Detroit Arab American Study, a sister survey to the Detroit Area Study; and senior advisor on the Pew Research Center projects focusing on Islam in America (2006) and Global Islam (2010). Ph.D. University of Michigan. In 2005, Jamal was named a Carnegie Scholar.