As President Trump returns from his first visit to China as Commander-in-Chief, how is U.S. foreign policy reacting to a new administration in Washington and a new rising power in Beijing? Join Ambassador and Harvard Kennedy School Professor Nicholas Burns in conversation with Jeeyang Rhee Baum, Ezra Vogel, and Odd Arne Westad, moderated by Michael Szonyi. 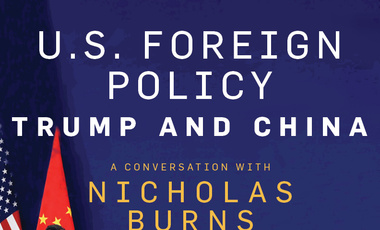 As President Trump returns from his first visit to China as Commander-in-Chief, how is U.S. foreign policy reacting to a new administration in Washington and a new rising power in Beijing?

This event was sponsored by Harvard’s Ash Center for Democratic Governance, and the Fairbank Center for Chinese Studies.