Presented by the American Repertory Theater (A.R.T.) at Harvard University, the Ash Center for Democratic Governance and Innovation, and the Middle East Initiative at Harvard Kennedy School. 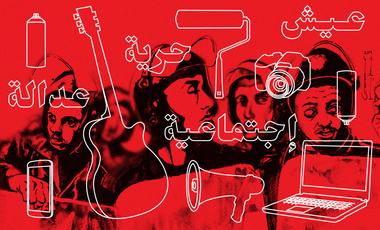 Presented by the American Repertory Theater (A.R.T.) at Harvard University and the Middle East Initiative at Harvard Kennedy School, the We Live in Cairo Act II Series invites audience members to remain at the theater following select performances for a curated discussion. The discussions are free and open to ticket-holders of any performance, subject to availability.

Written by brothers Daniel Lazour and Patrick Lazour, We Live in Cairo is inspired by the young Egyptians who took to the streets in 2011 to overthrow President Hosni Mubarak. It follows six revolutionary students armed with laptops and cameras, guitars, and spray cans from the jubilation of Cairo's Tahrir Square where the Egyptian revolution unfolded through the tumultuous years that followed.

Sultan Sooud Al Qassemi is a United Arab Emirates-based columnist and researcher on social, political, and cultural affairs in the Arab Gulf States. Al Qassemi’s tweets became a major news source during the Arab Spring, rivaling the major news networks at the time, until TIME magazine listed him in the “140 Best Twitter Feeds of 2011.” In 2018 he ranked 19th on the “Arabic Thought Leader Index” by the Gottlieb Duttweiler Institute. Al Qassimi was an MIT Media Lab Director’s Fellow from 2014 through 2016, a practitioner in residence at the Hagop Kevorkian Center of Near East Studies at New York University in the Spring of 2017, and a Yale Greenberg World Fellow in 2018. Al Qassemi is also the founder of the Barjeel Art Foundation, an independent initiative established in 2010 to contribute to the intellectual development of the art scene in the Arab region by building a prominent and publicly accessible art collection in the United Arab Emirates. In 2018, 100 works from the collection were hosted on a long-term basis at the Sharjah Art Museum. He is currently conducting research for a book that documents the modern architecture of the city of Sharjah in the United Arab Emirates and serves as a lecturer at the Council of Middle East Studies in Yale University, teaching a course on the politics of modern Middle Eastern art.

Tickets start at $25 and are available now online, by phone at 617.547.8300, and in person at the Loeb Drama Center Ticket Services Offices (64 Brattle Street, Cambridge). Discounts are available to A.R.T. Subscribers, Members, groups, students, seniors, Blue Star families, EBT card holders, and others.