What Does Arabness Mean in an Era of Revolution? 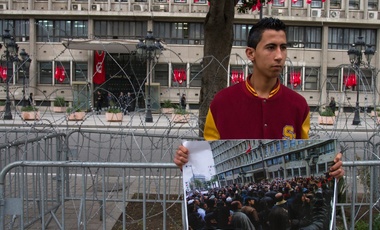 AP Photo/Amine Landoulsi
Mohamed Al Hui, 18, standing in front the Interior Ministry, holds a poster of the Ministry during the Revolution on Jan.14, 2011, on Tunis main avenue to mark the second anniversary of the Revolution, Monday, Jan.14, 2013.

In a time of unprecedented fragmentation and conflict in the Middle East, achieving Arab unity has become an urgent task.  This talk examines the obstacles and payoffs to Arab unity and integration, especially the role played by democracy and political change in building a more viable future.

Hicham Alaoui is currently a research fellow based at the Weatherhead Center for International Affairs at Harvard University, and is pursuing a D.Phil. at the University of Oxford. In the past, he was Principal Officer for Community Affairs with the United Nations peacekeeping mission in Kosovo, worked with the Carter Center in electoral monitoring, and sat on the MENA Advisory Committee for Human Rights Watch.  He also served as a board member for the Freeman Spogli Institute at Stanford University, and was a Regent lecturer at the University of California at Santa Barbara.  He currently sits on the advisory board of the Middle East Center of the Carnegie Endowment for International Peace.  He presides over the Hicham Alaoui Foundation, which supports social science research on the Arab world.  The Foundation also produced A Whisper to a Roar, an award-winning documentary on the struggle for democracy around the world. His writings about the Arab world have been published in journals such as Politique Internationale, Le Debat, Pouvoirs, Le Monde Diplomatique, and Journal of Democracy.  He has also contributed to The New York Times, Le Monde, La Nouvelle Observateur, El Pais, and Al-Quds.  His memoir, Journal d'un Prince Banni, was published in 2014 by Éditions Grasset, and has since been translated into Spanish and Arabic.  He is a graduate of Princeton and Stanford Universities.