Writing a New Arab Social Contract: The Need for Work and Dignity

A seminar with Zafiris Tzannatos, former Senior Advisor on Social Policy for the World Bank, International Labor Organization, and Government of the United Arab Emirates. 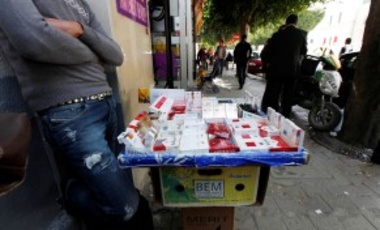 AP Images
Issam Khedri, 29, eldest brother of cigarette vendor Adel Khedri, tends to the cigarette stand of his late brother in the Tunisian capital, Tunis. Adel set himself on fire outside the Municipal Theater in the heart of Tunis on March 12, 2013.

A seminar with Zafiris Tzannatos, former Senior Advisor on Social Policy for the World Bank, International Labor Organization, and Government of the United Arab Emirates. Sixth session of the fall 2015 study group led by MEI Visiting Scholar Hedi Larbi, Rewriting the Arab Social Contract: Toward Inclusive Development and Politics in the Arab World.

The Arab Spring arose from the breakup of a social contract between Governments and citizens. The continuing turmoil in the Region suggests the absence of conflict resolutions mechanisms. Can a new social contract be agreed under such conditions in the near future?

Zafiris Tzannatos is currently a Senior Consultant for Development Strategy and Social Policy living in Lebanon where he was previously Professor and Chair of the Economics Department at the American University of Beirut.  He has served as Advisor to the Managing Director of the World Bank where he was also Manager for Social Protection in the Middle East and North Africa as well as Leader of the Global Child Labor Program that he initiated. More recently, he was Senior Advisor for the 22 Arab States for the ILO and, before that, for governments in the Middle East and the GCC – including Lebanon, Qatar and the UAE.  He has held senior academic and research appointments in Europe, visited more than 60 countries and worked with international and regional organizations as well as governments of industrialized, transition, emerging and developing economies across all continents. His publications include 14 books and monographs, and more than 200 reports and papers in the areas of development strategy, labor economics, education, gender and child labor and broader social policy. His current research is on the euro-crisis and the post-2010 developments in the Arab region.