A Year Like No Other: Technology and Public Purpose in 2020

The past year was unlike any other. The COVID-19 pandemic, Black Lives Matter movement, and Capitol riots were all extraordinary events--ones that forced us to confront long standing issues of race, equity, accessibility, democracy, and more. We also confronted the role of technology in both helping and harming public causes.

These past 12 months serve as a case study for technology and public purpose, forcing us to examine the immense benefits and critical harms of technologies in our daily lives. As the kickoff to the Perspectives of Public Purpose Week, Belfer Center and TAPP Faculty Director and the 25th U.S. Secretary of Defense Ash Carter will moderate a discussion with our inaugural cohort of TAPP fellows on how tech has both helped and hindered progress in 2020, and what lessons we’ve learned moving forward. 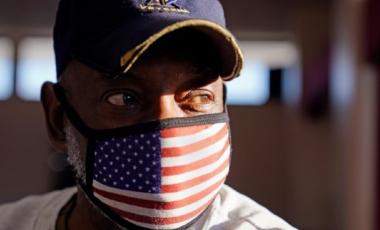 AP Photo/Charles Krupa
Bob Workman, a board of directors member at Veterans of Foreign Wars Post #1018
About
Speaker and Moderator Biographies
Watch Here

The past year was unlike any other. The COVID-19 pandemic, Black Lives Matter movement, and Capitol riots were all extraordinary events--ones that forced us to confront long standing issues of race, equity, accessibility, democracy, and more. We also confronted the role of technology in both helping and harming public causes.

Join Sec. Ash Carter and the inaugural cohort of TAPP Fellows as they discuss what Tech and Public Purpose meant in the last year and how we can take the lessons we learned as we move forward. 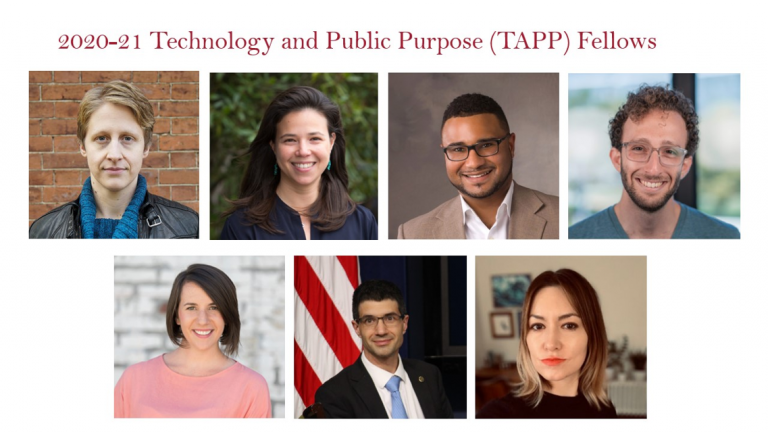 Ash Carter, Belfer Center and TAPP Project Faculty Director and the 25th U.S. Secretary of Defense
Ash Carter is the Director of the Belfer Center for Science and International Affairs at Harvard Kennedy School. He is also an Innovation Fellow at MIT.

For over 35 years, Carter has leveraged his experience in national security, technology, and innovation to defend the United States and make a better world.  He has done so under presidents of both political parties as well as in the private sector.

As Secretary of Defense from 2015 to 2017, Carter pushed the Pentagon to “think outside its five-sided box.” He created the military campaign to deliver ISIS a lasting defeat, designed and executed the strategic pivot to the Asia-Pacific, established a new playbook for the US and NATO to confront Russia’s aggression, and launched a national cyber strategy. Carter also spearheaded revolutionary improvements to the Department of Defense, developing new technological capabilities, leading the “Force of the Future” initiative to transform the way the department recruits, trains, and retains quality people, opening all military positions to women, and building bridges to America’s technology community.

Carter earned a BA from Yale University and a PhD in theoretical physics from the University of Oxford where he was a Rhodes Scholar.

Clare Bayley, TAPP Fellow, Technology and Public Purpose Project
Clare Bayley started her career in computer science at MIT, but quickly realized that she likes interacting with humans more than computers. Most recently, Clare served as the Director of Product for the United States Digital Service, working under the White House to improve how the government makes and uses technology (or trying to, anyway). Previously, she was the product lead for Google Developers Codelabs and the head of business intelligence for Kink.com.

Alongside technology, Clare’s other academic focus is sexuality in media and its effects on society. She minored in Women’s & Gender Studies and previously sat on the board of San Francisco Sex Information, a nonprofit dedicated to providing accurate and judgement-free information about human sex and sexuality.

Flavia Chen, TAPP Fellow, Technology and Public Purpose Project
Flavia Chen, MPH, is a Fellow in the Technology and Public Purpose Program at the Belfer Center for Science and International Affairs. Her research interests focus on the ethical and policy implications of translational genomics, including issues of data governance, as well as on social and policy influences on health outcomes. Since 2015, she has worked at the University of California, San Francisco managing interdisciplinary NIH grants studying the application of genome sequencing technologies in public health and clinical care. Her work has been published in The Hastings Center Report, Genetics in Medicine, and Pediatrics among others.

Flavia earned her MPH from the University of Washington’s Institute for Public Health Genetics, and her BA in environmental studies and history from Bowdoin College.

Devin Gladden, TAPP Fellow, Technology and Public Purpose Project
Devin C. Gladden is an energy, technology, and transportation policy professional who has worked on a variety of climate change and international issues. Currently in his role at AAA National as a manager for federal energy and technology policy, he covers a range of vehicle related issues — including gas prices, deployment of electric vehicles, and safety policy for self-driving cars. Prior to his current role, Devin served as a special advisor for the Office of Electricity and Energy Reliability (OE) at the U.S. Department of Energy during the Obama Administration. While in that role, he served as a policy advisor for OE's senior management team on climate change and international activities. He has also worked at the National Aeronautics and Space Administration, World Bank, and the state of Delaware.

He holds an MSc in Environmental Policy and Regulation from the London School of Economics and Political Science and a BA in International Political Economy and Environmental Studies from Fordham University.

Mark Lerner, TAPP Fellow, Technology and Public Purpose Project
Mark Lerner is an engineer, strategist, and design advocate with expertise in digital transformation. He focuses on empowering teams and improving critical services through technology and design. He most recently served as the Deputy Executive Director of the U.S. Digital Service team at the Department of Homeland Security, where he led and empowered a team of 30 engineers, product managers, and designers to improve critical services serving immigrants, asylum seekers, disaster survivors, and schools nationwide. He was a member of the U.S. Digital Service for four years and spent much of that time driving a mix of delivery and building organizational capacity. As part of his work at USDS, he built internal onboarding procedures, developed frameworks for managing political capital, and ensured a smooth transition between political administrations. Additionally, he managed and evaluated the technical competencies of over 100 companies in a $1.5B procurement.

Prior to working at USDS, Mark was a software engineer at Google, largely working on the Google for Nonprofits program. Mark expanded the Google for Nonprofits program to 30 additional countries outside of the U.S., enabling nonprofits across the world to access modern tools and advertising capital for free. While at Google, Mark also provided pro bono consulting for the City of San Francisco to improve their affordable housing programs through technology and design, leading to the creation of housing.sfgov.org, an award-winning affordable housing service.

Liz Sisson, TAPP Fellow, Technology and Public Purpose Project
Liz Sisson is the Chief Operating Officer of Urban Us, a venture group investing in startups that are improving life in cities and combating climate change. Prior to investing in urbantech, Liz was a Managing Director at the Roosevelt Institute, an economic think tank. In that role, she managed programs that researched and implemented public policy initiatives in local communities across the country - spanning a variety of subjects including economic development, transportation, climate change and housing.

In addition, Liz has done consulting work on state government programs related to transportation and the environment. She is currently a member of the Brooklyn Democratic County Committee in New York City. Liz is a graduate of Bentley University.

Jake Taylor, TAPP Fellow, Technology and Public Purpose Project
Jake Taylor is currently serving as the Assistant Director for Quantum Information Science at the White House Office of Science and Technology Policy (OSTP). When not on detail at OSTP, he is also a Fellow of the Joint Center for Quantum Information and Computer Science (QuICS), a Fellow of the Joint Quantum Institute (JQI), and a NIST Fellow at the National Institute of Standards and Technology (NIST).

Fascinated with astrophysics as an undergraduate, Taylor began his research career examining rarified gases and stellar clusters. A one-year position as a Luce Scholar introduced him to special-purpose computing, and in graduate school he returned to Harvard to focus on quantum computing. After receiving his PhD in physics, he moved to MIT as a Pappalardo Fellow, before starting his research group at NIST, and joining the JQI, in 2009. Six years ago, he co-founded QuICS --- a joint governmental-academic effort --- to connect computer scientists and physicists working on quantum coherent devices. In the past three years he has served at OSTP helping guide the Nation’s effort to advance American leadership in quantum information science as exemplified by the passage and implementation of the National Quantum Initiative, including standing up and directing the National Quantum Coordination Office. A Fellow of the American Physical Society, Taylor is also the recipient of the Department of Commerce Silver Medal, the IUPAP C15 Young Scientist Award, the Samuel J. Heyman Service to America Medal: Call to Service, the Presidential Early Career Award for Science and Engineering, and the Newcomb Cleveland prize of the AAAS.

Rebecca Williams, TAPP Fellow, Technology and Public Purpose Project
Rebecca Williams is a civic technology and information policy analyst with a background in law and city planning. She currently serves as a Digital Services Expert at the White House Office of Management and Budget’s Office of the Federal Chief Information Officer where she develops data policy and performance measures for the Federal Government. Rebecca has previously worked on data policy and management at the local, federal, and international level for Johns Hopkins University’s Center for Government Excellence, General Services Administration’s Data.gov, and the Sunlight Foundation.

She holds a B.A. in Communication from the University of Massachusetts Amherst and a J.D. from Western New England University School of Law where she participated in a joint Masters of Regional Planning program.