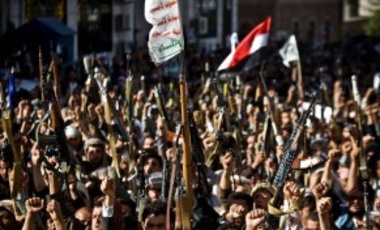 AP Images
Shiite rebels known as Houthis hold up their weapons as they chant slogans during a protest to denounce the Saudi aggression in Sanaa, Yemen.

A panel discussion on the current crisis in Yemen, featuring:

Once hailed as a success story among Arab Uprisings, Yemen’s delicate political transition has entered a critical juncture with the Houthi movement takeover of Sana’a and the subsequent dissolution of president Abed Rabbo Mansour Hadi’s government late in 2014. The transition process further deteriorated with the Saudi-led military campaign ‘Operation Decisive Storm’ on March 25, perceived by many as an effort to counter Iran-backed Houthis and as part of a regional proxy war between Iran and Saudi Arabia. The military campaign has added to instability and eroded the already weak infrastructure and economy of the country, creating a humanitarian crisis. Because of a power vacuum since the initial uprisings in 2012, now increasingly exploited by local Al-Qaeda affiliates, many fear Yemen is on the brink of failure. Why has the internationally-brokered political transition failed? Is military intervention a last resort for the Yemeni government? What is the stance of key power brokers in and outside of the country? What is the role of external actors and what do Saudi-Iranian proxy battles tell us about the future of regional geopolitics? What lies ahead for Yemen?

Fatima Abo Alasrar is an independent Policy Analyst from Yemen. Her work focuses on conflict management, human rights and democracy. Most recently she was a consultant on multiple countrywide conflict assessments in Yemen with International NGOs in Yemen such as Care, Oxfam and ADRA. Fatima is a former Economic Attaché at the Embassy of Yemen in Washington DC where she focused on developing the Yemen-US relationship through economic-assistnace and trade. Prior to that, Fatima was the Development Officer at the Department for International Development DFID in Yemen, where she advised on development and governance issues. Fatima is a former International Policy Fellow of Central European University in Budapest, Hungary. She obtained her Masters in International Relations from Johns Hopkins School of Advanced International Studies SAIS and her Bsc in Architecture from Sana'a University. Her previous research projects included the dynamics of informal tribal politics in Yemen, Gender in an Islamic society and Terrorist movements in the South of Yemen. She is currently a Masters in Public Administration candidate at the Kennedy School of Government.