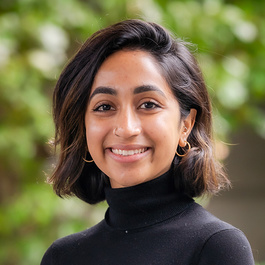 Amritha Jayanti is the Acting Director of the Technology and Public Purpose (TAPP) Project at Harvard Kennedy School’s Belfer Center for Science and International Affairs. Before assuming this role, she served as a Research Associate, supporting both TAPP and the Belfer Center’s Director and former U.S. Secretary of Defense, Ash Carter. Her work focuses on emerging technology, international security, and public purpose.

Prior to joining the Belfer Center, Amritha was a visiting researcher at the University of Cambridge’s Centre for the Study of Existential Risk where she primarily researched the governance of artificial intelligence in Western military organizations. She has also worked at the Brookings Institution’s Center for Technology Innovation researching the application of artificial intelligence in various sectors, including defense and education.

Prior to her policy-oriented focus, Amritha served as the lead product manager at Clara Labs, a San Francisco-based, Sequoia-back startup. She also served as the Executive Director of a San Francisco-based non profit, Interact, focused on supporting young technologists interested in social impact. Additionally, she founded a nonprofit, Technica, which encourages gender diversity in computer science and STEM more broadly; she remains a member of the board.

Amritha received her B.S. from the University of Maryland, where she studied computer engineering, economics, and public policy.