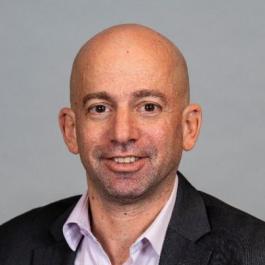 Avner Halperin is a fellow at the Middle East Initiative. He is an entrepreneur, executive and researcher in the fields of digital health and big data economics. He is Chairman of the Board at EyeControl – winner of the Genesis Award for contribution to the battle against COVID-19.  He also teaches a course on big data economics at the Tel Aviv University. In addition, he leads Global Innovation for Sheba Medical Center – ranked as one of the Top 10 Best Hospitals in the world.

Previously, he was the founding CEO of EarlySense for 15 years - bringing the company from the idea stage to over 1,000,000 patients served and tens of thousands of lives saved. Prior to that, Avner was CEO of Emmunet, VP Marketing at Radcom (NASDAQ: RDCM), and R&D leader at Eldat Communications (acquired by Pricer(PRIC.ST)). Earlier, he was Department Head of an R&D Unit in the Israeli Defence Forces Intelligence Corps where he won the Intelligence Innovation Award.

Avner earned an MSc in Applied Physics from Tel Aviv University and an MBA from MIT where he did research on globally dispersed teams.  He taught courses on economics and entrepreneurship in the Hebrew University of Jerusalem.  His research papers and 33 US Patents have been cited over 3,800 times.  He gave a TEDx talk on Artificial Intelligence in Healthcare in 2019.