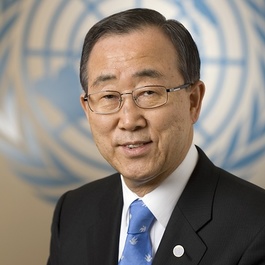 Mr. Ban has served two consecutive terms as the Secretary General of the United Nations (2007-2016). Having retired from the UN, he has been actively promoting global agenda including SDGs, climate change and woman’s empowerment. Mr. Ban will be a Harvard Kennedy School Fisher Family Fellow with the Future of Diplomacy Project in the academic year 2018-2019.

In this regard, he assumed the position of Distinguished Chair Professor and Honorary Chairman at the Institute of Global Engagement & Empowerment at Yonsei University in Seoul, Korea. He also was elected as Chairman of IOC Ethics Committee in September 2017.

Since January 2018, Mr. Ban, along with former President of Austria Mr. Heinz Fischer, has been inducted as Co-Chairs of the Ban Ki-moon Centre for Global Citizens in Vienna, Austria. Since February 2018, he also has    been elected as the President of the Assembly & Chair of the Council of Global Green Growth Institute (GGGI). In April 2018, Mr. Ban has been elected as the Chairman of Boao Forum for Asia.

Throughout his tenure at the UN, Mr. Ban strove to be a bridge builder, to give voice to the world’s poorest and the most vulnerable people, and to make the Organization more transparent and effective. He has pressed successfully for action to combat climate change- an effort that culminated in the adoption and rapid entry into force of the landmark Paris Agreement in 2016. Mr. Ban has worked closely with member states of the UN to shape the 2030 Agenda for Sustainable Development and to establish UN Women, which has been advancing the Organization’s work for gender equality and women’s empowerment. Mr. Ban has also taken major efforts to strengthen UN peace operations, to protect human rights, to improve humanitarian response, to prevent violent extremism and to revitalize disarmament agenda.

At the time of his appointment at the UN, Mr. Ban has been the Minister of Foreign Affairs and Trade of the Republic of Korea. His 37 years with the Ministry includes postings in New Delhi, Washington D.C., and Vienna, and responsibilities for a variety of portfolios, which includes Foreign Policy Adviser to the President, Chief National Security Adviser to the President, Vice Minister, Deputy Minister for Policy Planning and Director-General for American Affairs. Mr. Ban has also been actively involved in issues relating to inter-Korean relations by serving as Chairman of the Preparatory Commission for the Comprehensive Nuclear Test Ban Treaty Organization.