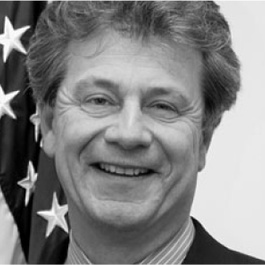 He has served on Advisory Boards to the American Military Commander of Europe and NATO, as well as the Command for American Forces for Central and South America. He is on the Board of Directors for several companies and institutions, including Diamond Offshore Drilling (NYSE:DO), Wenzhou Kean University based in Zhejiang Province, Fundação Dom Cabral Brazil (FDC), Council of American Ambassadors, Council of the Americas, and Christie’s Advisory Board for the Americas. Ambassador Sobel has received award recognition for contributions to bilateral relations from Brazil’s Ministry of Defense, as well as the State Governments of Minas Gerais, Pernambuco and Sergipe.

Cliff enjoys spending time with his 8 grand children, loves to ski and is an avid collector of Brazilian and American abstract expressionist; Vick Muniz, Antoni Giez, and Tunga are among his favorites.