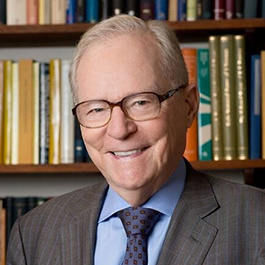 Dale W. Jorgenson is a former Faculty Affiliate with the Environment and Natural Resources Program.

The Samuel W. Morris University Professor at Harvard University, he received a BA in economics from Reed College in Portland, Oregon, in 1955 and a PhD in economics from Harvard in 1959. After teaching at the University of California, Berkeley, he joined the Harvard faculty in 1969 and was appointed the Frederic Eaton Abbe Professor of Economics in 1980. He served as Chairman of the Department of Economics from 1994 to 1997. Jorgenson has been honored with membership in the American Philosophical Society (1998), the Royal Swedish Academy of Sciences (1989), the U.S. National Academy of Sciences (1978), and the American Academy of Arts and Sciences (1969). He was elected to Fellowship in the American Association for the Advancement of Science (1982), the American Statistical Association (1965), and the Econometric Society (1964). He was awarded honorary doctorates by Uppsala University (1991), the University of Oslo (1991), Keio University (2003), the University of Mannheim (2004), and the University of Rome (2006). Jorgenson served as President of the American Economic Association in 2000 and was named a Distinguished Fellow of the Association in 2001. He was a Founding Member of the Board on Science, Technology, and Economic Policy of the National Research Council in 1991 and has served as Chairman of the Board since 1998. He also served as Chairman of Section 54, Economic Sciences, of the National Academy of Sciences from 2000 to 2003 and was President of the Econometric Society in 1987. Jorgenson received the prestigious John Bates Clark Medal of the American Economic Association in 1971. This Medal is awarded every two years to an economist under forty for excellence in economic research. The citation for this award reads in part: Dale Jorgenson has left his mark with great distinction on pure economic theory (with, for example, his work on the growth of a dual economy); and equally on statistical method (with, for example, his development of estimation methods for rational distributed lags). But he is preeminently a master of the territory between economics and statistics, where both have to be applied to the study of concrete problems. His prolonged exploration of the determinants of investment spending, whatever its ultimate lessons, will certainly long stand as one of the finest examples in the marriage of theory and practice in economics. Jorgenson has conducted groundbreaking research on information technology and economic growth, energy and the environment, tax policy and investment behavior, and applied econometrics. He is the author of 241 articles in economics and the author and editor of thirty books. His collected papers have been published in ten volumes by The MIT Press, beginning in 1995. His most recent book, INFORMATION TECHNOLOGY AND THE AMERICAN GROWTH RESURGENCE, co-authored with Mun Ho and Kevin Stiroh and published by The MIT Press in 2005, represents a major effort to quantify the impact of information technology on the U.S. economy. Another MIT Press volume, LIFTING THE BURDEN: Tax Reform, the Cost of Capital, and U.S. Economic Growth, co-authored with Kun-Young Yun in 2001, proposes a new approach to capital income taxation, dubbed “A Smarter Type of Tax” by the FINANCIAL TIMES. Sixty-five economists have collaborated with Jorgenson on published research. An important feature of Jorgenson's research program has been collaboration with students in economics at Berkeley and Harvard. Many of his former students are professors at leading academic institutions in the United States and abroad and several occupy endowed chairs. The MIT Press published ECONOMETRICS AND THE COST OF CAPITAL, edited by Lawrence J. Lau, in 2000. This contains essays in honor of Jorgenson presented at a conference at Harvard by thirteen of his former students. It also contains his biography, a list of his publications, and a list of his sixty-four Ph.D. thesis advisees at Berkeley and Harvard through 2000. Jorgenson was born in Bozeman, Montana, in 1933 and attended public schools in Helena, Montana. He is married to Linda Mabus Jorgenson, who is an attorney in Cambridge, Massachusetts. Professor and Mrs. Jorgenson reside in Cambridge. Their daughter Kari, 31, is an honors graduate of Harvard College in economics, Class of 1997, a graduate of Columbia Law School, Class of 2003, and an Associate at Wilmer, Cutler, Pickering, Hale and Dorr in Boston. She is married to Kenneth Beausang. Their son Eric, 33, is a graduate of Duke University in biology, Class of 1995, and received an M.S. in statistics in 1999 and a Ph.D. in human genetics in 2004 from Stanford University. He is a post-doctoral fellow in Epidemiology and Biostatistics at the University of California, San Francisco.