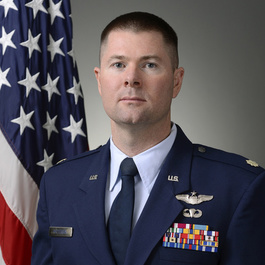 Lieutenant Colonel Dillon “DP” Patterson is an officer in the Arizona Air National Guard who recently served as commander, 214th Operations Support Squadron, Davis-Monthan Air Force Base, Arizona. He is a command pilot with over 3,300 hours in the T-37, T-38, B-1, MQ-1, MQ-9, and RQ-170. He has deployed as a liaison officer to an air operations center and multiple special operations joint task forces, as well as commander of an RQ-170 forward operating location. Additionally, he has served in the Pentagon as Chief of Executive Engagements, Office of the Director of the Air National Guard. DP holds a Master of Arts degree in defense and strategic studies from the US Navy War College in Newport, Rhode Island, and a Bachelor of Science degree in electrical engineering from Embry-Riddle Aeronautical University in Prescott, Arizona.  Research interests include ethics-based policy guiding the utilization of artificial intelligence and advanced automation in weapons systems, as well as the impact of US monetary policy on national security.